RAWALPINDI (92 News) – Chief of Army Staff General Raheel Sharif has on Tuesday met Chinese Prime Minister Li Keqiang in Beijing. During the meeting, matters relating to cooperation in different sectors including defense were discussed. On the occasion, the Chinese premier said that both countries enjoy historic political, military and economic relations. He said that China Pakistan Economic Corridor (CPEC) project is not only a flagship project between the two countries but it will also bring stability and development in the region. He said that Beijing is cooperating with Islamabad for regional peace and prosperity. The COAS Gen Raheel Sharif said that Pakistan Army is ready to provide safe environment for the CPEC project. 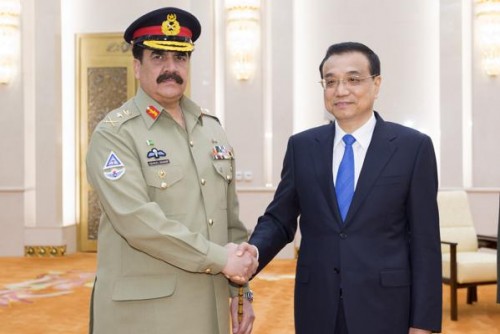