ISLAMABAD (92 News) – Prime Minister Imran Khan has extended the service of Chief of Army Staff General Qamar Javed Bajwa for three years. According to a notification issued on Monday, the decision has been taken in view of the regional security environment. 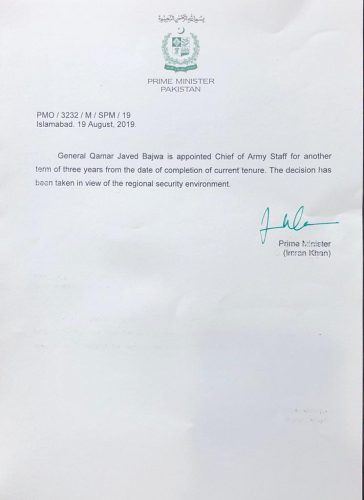 92 News had aired the news about extension in the service of COAS Chief of Army Staff General Qamar Javed Bajwa in its program ‘Ho Kaya Raha Hai’ on July 25. Senior Analyst Arif Nizami had informed the viewers that the service tenure of COAS General Qamar Bajwa would be extended. The extension will be applicable after the completion of the present tenure. The COAS will hold the post till 2022. During his service, Chief of Army Staff General Qamar Javed Bajwa restored peace in tribal areas. He also defended the borders of the homeland in addition to resolving the problems emerging after the rehabilitation of thousands of tribal people. The COAS also visited the front posts of troops to raise the morale of the jawans. He also has a vast experience of affairs in Kashmir and Northern Areas. Foreign Minister Shah Mahmood Qureshi said that the prime minister had used his constitutional power in view of the situation in Occupied Jammu and Kashmir and Afghanistan. “Keeping in view the situation in the region, the service tenure of COAS Qamar Bajwa has been extended. “The real situation in IOK will be clear after the lifting of the curfew.” The minister said that according to the AFP report, an attempt was made to break the curfew on Saturday. “There are reports about skirmishes between Indian security forces and Kashmiris,” he said. Foreign Minister Shah Mahmood Qureshi said that the statement of Indian defence minister is irresponsible and their intentions are visible. “It is a clear message before the world that Pakistan’s political and military leadership are on the same page,” he said. Meanwhile in a tweet, Federal Minister for Water Resources Faisal Vawda has welcomed the PM decision to extend the service of COAS General Qamar Javed Bajwa.

“Don’t change horses in midstream,” he said. The minister said that COAS General Qamar Bajwa was needed at this crucial point for Pakistan.