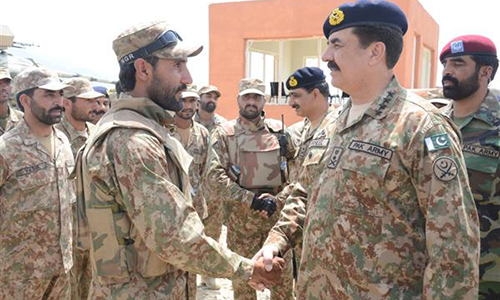 RAWALPINDI (92 News) – Chief of Army Staff (COAS) General Raheel Sharif visited front lines in Wazirastan and reviewed the progress of ongoing operations on Wednesday. Showing satisfaction over gains of operations so far, the COAS appreciated the high morale manifested while fighting the terrorists in the most rugged terrain. Talking to troops, the COAS said operation ZeA is in its final stages in North Waziristan Agency and remnants of terrorists who have been squeezed into penny pockets will also be cleared shortly. The COAS also oversaw future operations, including Shawal, and directed commanders to ensure that these terrorists must remain cut off from their friends and their outside support. “The enemies of state and their financiers will not find any place in the country and will ultimately meet their justified end.” The COAS said that the successes of operation ZeA and sacrifices of the officers and men have been acknowledged by the entire nation.