RAWALPINDI (92 News) – Chief of Army Staff (COAS) General Raheel Sharif reached Tajikistan on a one-day visit on Tuesday. The COAS called on Tajik President Emomali Rahmon and discussed regional situation with particular reference to common challenges of fighting terrorism and reconciliation in Afghanistan, which shares a border with both countries. The Tajikistan president appreciated Pakistan’s facilitation role in reconciliation process in Afghanistan and also lauded Pakistan Army's phenomenal achievements in operation ZeA. He noted with admiration that the operation being conducted by Pakistani forces against terrorists is a role model for rest of the world. He said that General Raheel Sharif’s visit will further cement bilateral relationship with Pakistan and provide an impetus to defence cooperation between both countries. During the meeting, the COAS said that Pakistan attaches great importance to its relations with Tajikistan and offered Pakistan’s full support in capacity building of Tajikistan forces to counter terrorism. The COAS also held a meeting with Tajik Defence Minister and Chief of General Staff. On arrival at the Army Headquarter, COAS was accorded a very warm welcome and presented guard of honor. 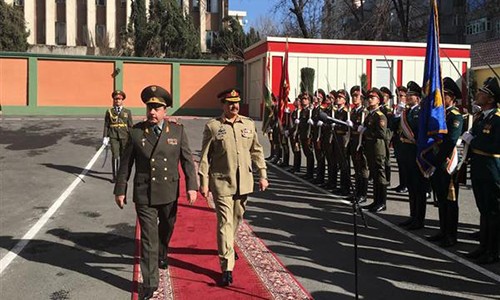