RAWALPINDI (92 News) – Chief of Army Staff (COAS) General Raheel Sharif conferred military awards on Army personnel for acts of gallantry in the ongoing Operation Zarb-e-Azb in an investiture ceremony held at General Headquarters on Thursday. A large number of military officials and relatives of Shuhada and Ghazis attended the ceremony. Thirty-five officers and soldiers were awarded Tamgha-i-Bisalat, 35 officers were awarded Sitara-i-Imtiaz (Military), and five officers and soldiers were awarded United Nations (UN) medals. 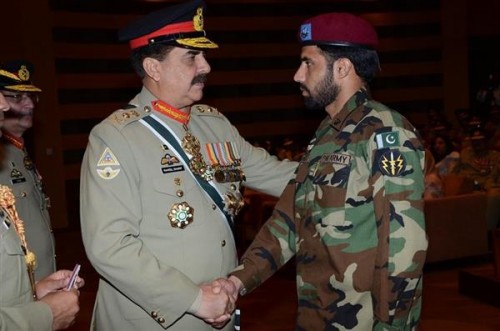 The medals of Shuhada were received by their family members. After the ceremony, the COAS interacted with the relatives of Shahuada and spent time with them.