During the meeting, they reviewed the ongoing Afghan reconciliation process and discussed the way forward.

General John F Campbell, during the meeting, paid rich tributes to the professionalism and phenomenal achievements of Pakistan Army in operation Zarb-e-Azb. He also acknowledged the efforts of Pakistan Army for regional stability.

The COAS particularly thanked the outgoing Commander Resolute Support Mission for his efforts towards stability in Afghanistan.

To pay tributes to the martyrs of Pakistani Security Forces, General John F Campbell also laid a floral wreath at the Yadgar-e-Shuhada.

The COAS was given a detailed operational and security brief. He expressed his complete satisfaction over operational preparedness of the Corps. 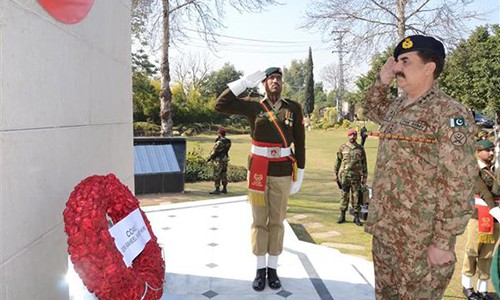 He also laid a floral wreath at Yadgar-e-Shuhada, offered Fateha and paid rich tributes to the supreme sacrifices of the officers and men of Pakistan Army deployed along the LOC.