RAWALPINDI (92 News) – Chief of Army Staff (COAS) General Raheel Sharif visited North and South Waziristan on Tuesday. He was briefed about the progress of stablization operations, return of TDPs and development works in FATA. Expressing his satisfaction at the progress of return of TDPs, COAS commended the efforts of everyone involved in ensuring their smooth and timely return with dignity and honour. He directed them to complete the return of remaining TDPs within stipulated time before close of the year 2016. As part of a comprehensive rehab and reconstruction effort, significant rehab projects were commissioned on Tuesday. 84 KMs long Bannu-Miranshah-Ghulam Khan Road funded by USAID and constructed by FWO was opened. This would become the shortest trade route to Afghanistan wherein travelling time between Bannu and Ghulam Khan border post will reduce from 6 hours to 1.5 hour. With this road, 705 KMs long strategic central trade corridor to Afghanistan has been completed for all kind of move across the border up to Central Asia. The COAS also inaugurated state of the art Younis Khan Sports Stadium with a packed crowd of viewers watching an inaugural match played between FATA Eleven and Younis Khan Eleven. The COAS expressed the hope that enormous talent of the FATA youth will be honed with upcoming educational and sports facilities and with no dearth of talent, their aspirations to rise at the international level will be accomplished. Addressing the Jirga of tribal elders, General Raheel Sharif said that Operation Zarb-e-Azb had irreversibly eradicated terrorist networks from the FATA. He said: “We have made considerable gains in our operations and reached close to our objective of total elimination of terrorism from our soil.” Paying glowing tributes to tribal people, COAS lauded them for their full support to the security forces in their effort for peace and stability of the region. 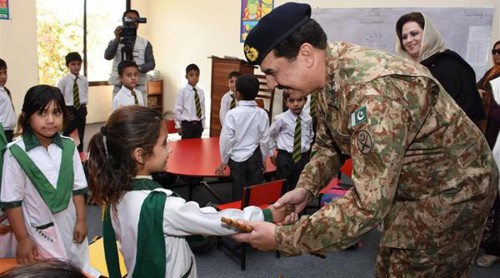 The COAS assured the tribals that Pak Army and government are determined to ensure all promises made for their socio-economic development are delivered to open avenues of prosperity and socio economic turnaround. “We will give a secure and prosperous Pakistan to our future generations”, he added. Tribal elders thanked COAS for cleansing their area from terrorists, bringing peace and ensuring a quality reconstruction work. Earlier, General Raheel Sharif and his wife also visited South Waziristan to see one of the newly opened APS in Chagmalai and spent time with the children. Speaking on the occasion, he commended the faculty and the students for exhibiting such excellent standards of education in these areas. The COAS appreciated the locals for their keenness to send their children to schools. “Only education can help elevate our future generations to growth and prosperity,” COAS emphasized. During the visit to Miranshah, Begum Raheel Sharif had a separate interaction with the huge gathering of local ladies. She appreciated their sacrifices and heard their issues related to their resettlement. Earlier on his arrival, Chief of Army Staff General Raheel Sharif was received by Lieutenant General Hidayatur Rehman, Corps Commander Peshawar Corps.