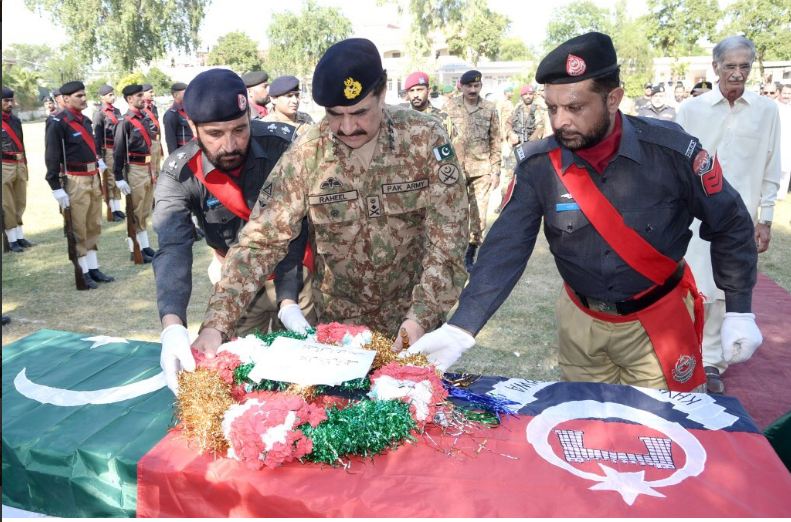 MARDAN (92 News) – Chief of Army Staff General Raheel Sharif attended the funeral for the police officer who embraced martyrdom while checking a suicide bomber in courts on Friday. According to the ISPR, he acknowledged the valor of the police officer. The COAS said that the police officer evaded the big loss by sacrificing his life. Earlier, the COAS inquired after the health of those injured in twin suicide blast in Mardan District Courts. Earlier, two bombs killed at least 13 people and wounded dozens outside a court complex in Mardan, hours after militants from a Pakistani Taliban faction attacked a Christian neighborhood in the same region. The bodies of lawyers, policemen and civilians were recovered from the blast site, said Haris Habib, chief rescue officer in the city of Mardan in Khyber Pakhtunkhwa province. "First there was a small blast followed by a big blast," Habib said. More than 20 people were killed in an attack in December on a government office in Mardan, which was later claimed by Jamaatur Ahrar, a breakaway faction of the Pakistani Taliban. No militant group has yet claimed responsibility for Friday's court attack, but Prime Minister Nawaz Sharif said the bombing would "not shatter our unflinching resolve in our war against terrorism". "These receding elements are showing frustration by attacking our soft targets. They shall not get space to hide in Pakistan," Sharif said in a statement. Security in Pakistan has improved in recent years but terrorist groups continue to stage major attacks. More than 70 people, mostly lawyers, were killed last month in a suicide bombing in the southwestern city of Quetta. Both Jamaatur Ahrar and Islamic State claimed responsibility.