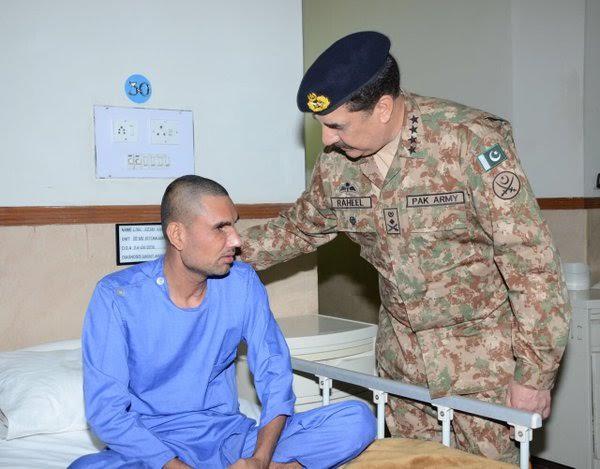 RAWALPINDI (92 News) – Chief of Army Staff (COAS) General Raheel Sharif visited Armed Forces Institute of Ophthalmology (AFIO) and met wounded warriors of Operation Zarb-e-Azb. The COAS, while interacting with war heroes, paid richest tribute to their sacrifice and valour. “We never give up and never quit.” Till date a total 179 soldiers have lost their complete or partial eyesight due to IED blasts. At present 56 valiant sons of soil are undergoing treatment at the Armed Forces Institute of Ophthalmology. Of them, 30 have lost their both eyes. The COAS spent time with them and inquired after their health. During his visit to AFIO, the COAS was given a detailed briefing on pilot project of state-of-the-art Visual Rehabilitation Center for visually disabled soldiers, which includes computer / IT Lab, Braille, vocational and recreational facilities. The COAS was briefed that all efforts are being made to retrieve eye sight of few injured soldiers who are in curable zone. General Raheel Sharif instructed all concerned to leave no stone unturned to provide the best medical treatment to these national heroes who have sacrificed their eyesight to help realize Quaid’s vision of Pakistan. The COAS appreciated the standard of treatment and medical care being extended by dedicated team of doctors and paramedical staff at (AFIO). Earlier on arrival, the COAS was received by Adjutant General Lieutenant General Anwar Ali Hyder and Lieutenant General Syed Muhammad Imran Majeed, Surgon General Pakistan Army. 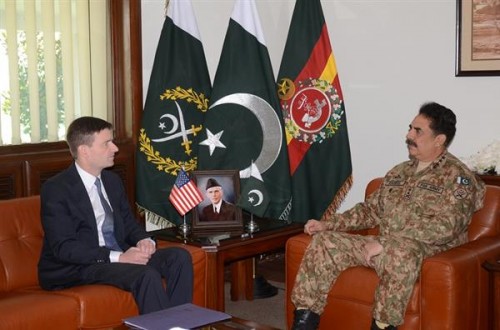 Meanwhile, US Ambassador to Pakistan David Hale called on Chief of Army Staff (COAS) General Raheel Sharif at GHQ. During the meeting, situation arising after US drone strike in Balochistan on May 22 came under discussion. COAS General Raheel Sharif expressed serious concerns over the drone strike. General Raheel Sharif said that such acts of sovereignty violations are detrimental to relations between the two countries and are counter-productive for ongoing peace process for regional stability. He said that Pakistan’s efforts, successes and sacrifices in fight against terrorism have been unparalleled.