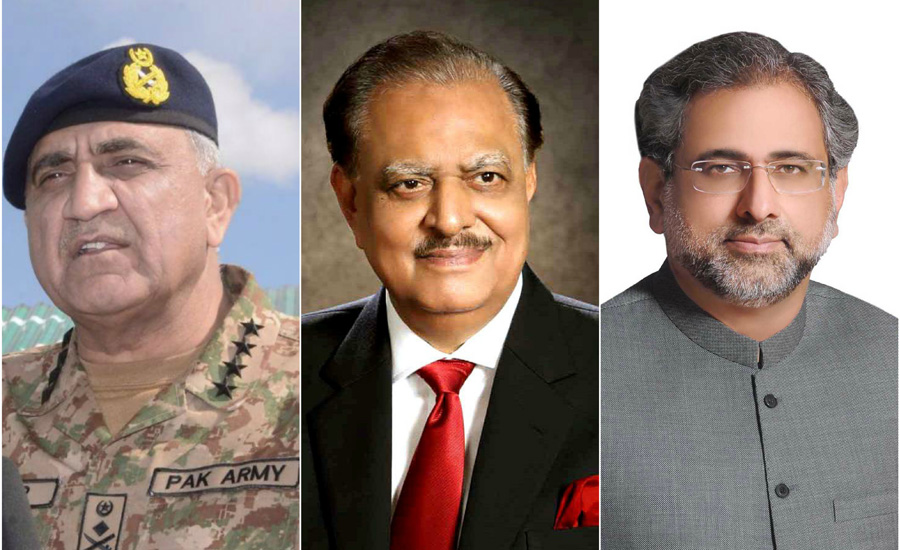 KARACHI/ISLAMABAD (92 News) – Chief of Army Staff (COAS) General Qamar Javed Bajwa, President Mamnoon Hussain and Prime Minister Shahid Khaqan Abbasi have congratulated Pakistan Cricket Board (PCB), its PCB Chairman Najam Sethi, players and the nation on successful conduct of final of Pakistan Super League 3 (PSL) final in Karachi. In his message, the COAS said “Congrats to Islamabad United ‘the Champions’. He said that with the successful conduct of final of PSL3 final in Karachi, Pakistan won today, adding that best of the day was excited yet very disciplined spectators of Karachi. “Nothing can defeat our national passion”, Gen Qamar Bajwa added. On the other hand, President Mamnoon Hussain congratulated the Islamabad United team for winning the final match of the Pakistan Super League 2018. He said that both the teams played a great game in the tournament. Extending his felicitations to the nation, the president said by successfully holding the PSL, the nation had trampled the terrorism and extremism under its feet declaring Pakistan a peaceful democratic country. Mamnoon Hussain said that the hustle and bustle had returned to Pakistan’s playgrounds and believed that the Pakistani youth would turn this region into a cradle of peace and prosperity by exploiting their capabilities and resolve. Meanwhile, Prime Minister Shahid Khaqan Abbasi felicitated Islamabad United team on clinching the trophy and also appreciated the runner-up Peshawar Zalmi for showing a great game in the tournament. He said that the event offered an excellent opportunity to the cricket fans to witness the ultimate cricket experience across Pakistan; the enthusiasm and excitement of cricket fans at National Stadium Karachi was indeed commendable, stated the prime minister. The prime minister expressed his gratitude to the international players who led the PSL to the magnificent outcome through their participation and extraordinary performance. Minister of State for Information and Broadcasting Marriyum Aurangzeb have congratulated the PCB, players and the nation on successful conduct of final of PSL three in Karachi.