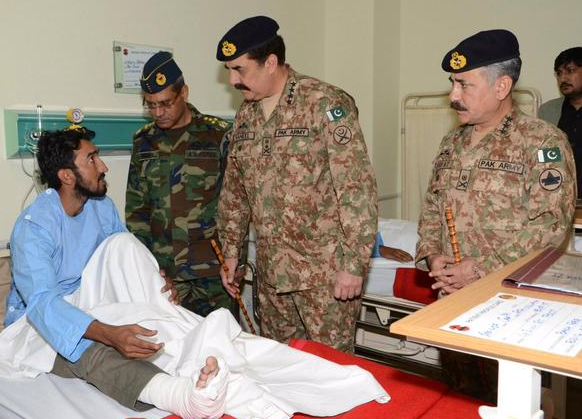 PESHAWAR (92 Mews) – Chief of Army Staff General Raheel Sharif on Friday reached Corps Headquarter Peshawar where Corps Commander Peshawar Lt Gen Hidayatur Rehman briefed him regarding terrorist attack on Badaber airbase camp. In a statement issued by the ISPR, Air Chief Sohail Amaan also reached the Corps Headquarter and participated in the briefing. The COAS was told that 13 attackers entered the base camp from two different sides in two different groups and attacked the mosque, killing 16 people and injuring 13 others. “A heavy contingent of the Quick Reaction Force has reached the spot and engaged the attackers and contained them around a guard room,” ISPR said. According to the ISPR, the army chief and air chief were told in the briefing that at least four members of the armed forces – army officer Captain Isfandayar Bukhari and three junior PAF technicians – embraced martyrdom while fighting terrorists. Army Chief Gen Raheel Sharif and Air Chief Sohail Amaan visited CMH Peshawar and met with all injured soldiers from the Army and the PAF.