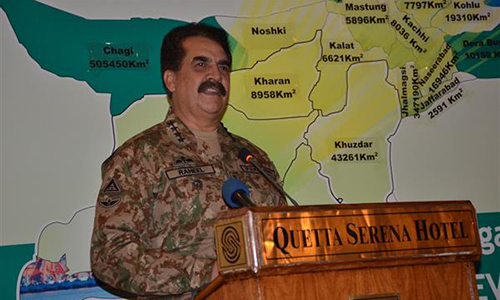 QUETTA (92 News) – Chief of Army Staff General Raheel Sharif has said that terrorists are getting foreign aid and facilities from the country.

Addressing a seminar on peace and prosperity in Balochistan on Tuesday, he said that peace would be established soon due to sacrifices of the Pak Army.

“The future of Balcohistan is bright. We have constructed 632km roads in the province. The process of reforms is continuing for the resolution of the problems,” he said.

“Nothing except destruction will be achieved through the use of force in Balochistan. We want reconciliatory process,” he said.

The COAS announced to set up a campus of NUST University in Quetta.