RAWALPIND (92 News) – COAS General Qamar Javed Bajwa visited Lahore Garrison and laid a floral wreath at Yadgar-e-Shuhada on Friday. On arrival, the COAS was briefed in details about operational preparedness and other matters at Corps HQ and HQ Pak Rangers Punjab. The COAS expressed his satisfaction over operational readiness and appreciated Punjab Rangers' response to ongoing Cease Are Violations (CFV) along with Working Boundary (WB) by Indian troops. Later addressing officers and troops of Lahore Garrison, the COAS highlighted the challenges for the Army. 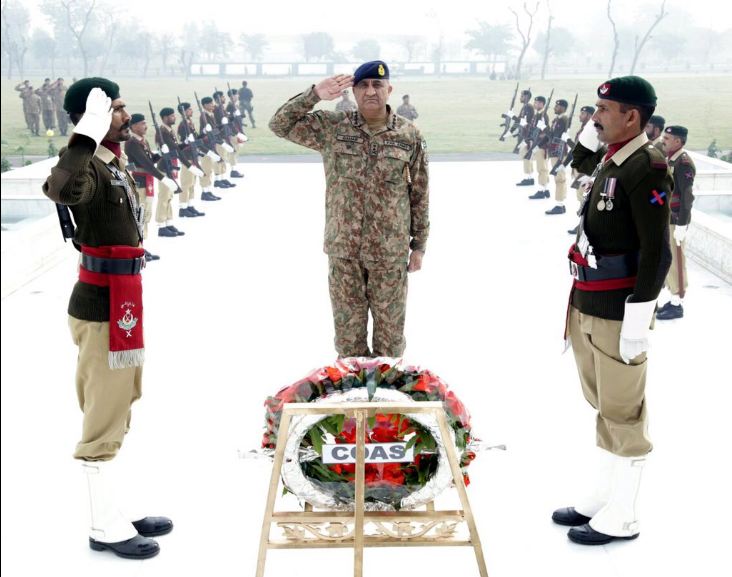 He said that Pak Army and Pakistan Rangers Punjab had played an important role for reduction in the internal security threats as well as effective response along the Working Boundary. “The nation acknowledges and fully supports Pak Army's contributions in our fight against terrorism and militancy. “We shall always come up to the expectations of the people of Pakistan who are our real strength," he said. Talking about Indian provocations along Line of Control (LOC) and WB, the COAS said that India is trying to divert world's attention from its atrocities against innocent Kashmiris in Indian Held Kashmir. "Pak Army and Rangers are fully prepared for a befitting response to any misadventure from across," he pledged. Earlier on arrival, COAS was received by Commander Lahore Corps Lt Gen Sadiq Ali.