QUETTA (92 News) – Chief of Army Staff (COAS) General Raheel Sharif on Wednesday warned foreign states, intelligence agencies against trying to destabilise Pakistan by supporting terrorists in Balochistan and said they will be defeated comprehensively. According to Director General (DG) Inter-Services Public Relations (ISPR), Major General Asim Saleem Bajwa, the COAS reached the provincial capital on a day-long tour and participated in a high-level meeting to discuss the security situation in the province. General Raheel Sharif also visited the Frontier Corps (FC) Headquarters where he was briefed by FC IG Major General Sher Afgan about the security operations being carried out in the province. Highlighting security challenges of Balochistan, the COAS emphasised need to adopt integrated approach by civil, military leadership and Law Enforcement Agencies (LEAs) for a peaceful Balochistan. 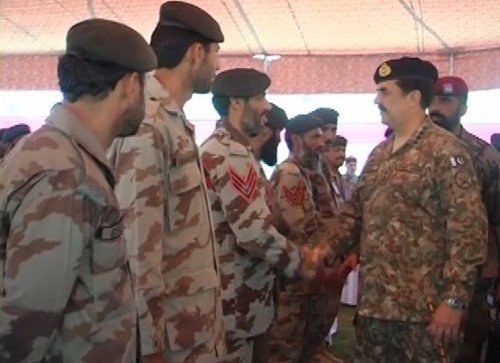 "Will unearth terrorists, abettors, sympathisers, financiers. None will find place in country to hide. Will go to any length for writ of state," the DG ISPR quoted COAS. COAS commended LEAs, Frontier Corps for noticeable law and order improvement.  He vowed to stand by people of Balochistan to bring peace, prosperity. The Army Chief expressed grief on brutal killing of poor, innocent labourers by terrorists in Turbat, vowed to support Balochistan government to eliminate them totally. The COAS met Balochistan Governor, Chief Minister Balochistan and Commander of Southern Command during his visit.