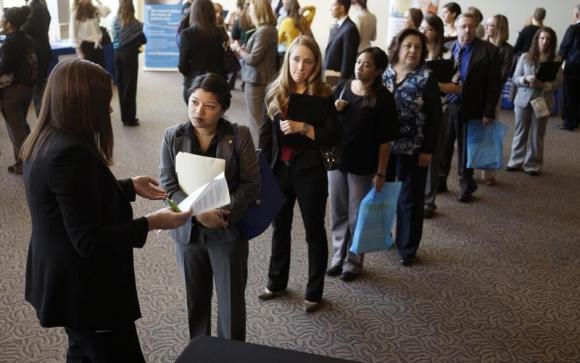 WASHINGTON (Reuters) - US retail sales unexpectedly fell for a third straight month in February as harsh weather kept consumers from auto showrooms and shopping malls, tempering the outlook for first-quarter growth and a June interest rate increase. Even accounting for the snowy and cold weather, which blanketed much of the country in late February, there is little doubt that consumer spending has slowed significantly after robust growth in the fourth quarter. Consumer spending accounts for more than two-thirds of US economic activity. "This report points to a surprisingly bigger weather impact on spending activity than previously thought. The weakness in spending could potentially complicate the case for a mid-year hike by the hawkish members of the Fed," said Millan Mulraine, deputy chief economist at TD Securities in the New York. The Commerce Department said on Thursday retail sales dropped 0.6 percent as receipts fell in almost all categories. Sales had declined 0.8 percent in January. It was the first time since 2012 that sales had dropped for three consecutive months. Economists had forecast retail sales increasing 0.3 percent last month. The Fed had been widely expected to remove a reference to being "patient" in deciding when to raise rates at next week's two-day meeting, putting a June rate increase in play. Some economists and traders think the US central bank may want to wait longer to be certain any weakness early in the year was temporary. The cool-off in economic activity has been blamed on the bad weather and the now-settled labor dispute at the country's West Coast ports, which disrupted the supply chain. Stocks on Wall Street were trading higher, while the dollar fell against a basket of currencies. Prices for longer-dated US Treasury debt rallied. WEAK SALES VS STRONG LABOR MARKET Retail sales excluding automobiles, gasoline, building materials and food services were flat after a downwardly revised 0.1 percent dip in January. The so-called core retail sales correspond most closely with the consumer spending component of gross domestic product. Core retail sale have been downbeat since December. February's weak reading and January's revision prompted economists to cut their first-quarter GDP growth estimates by as much as six-tenths of a percentage point to as low as a 1.2 percent annual rate. The economy grew at a 2.2 percent pace in the fourth quarter. With the labor market rapidly firming, the moderation in growth is likely to be temporary. A separate report from the Labor Department showed initial claims for state unemployment benefits declined 36,000 to a seasonally adjusted 289,000 for the week ended March 7. That was well below economists' expectations for a drop to only 305,000 and unwound much of the prior two weeks' increases, which had pushed claims well above the 300,000 mark. Economists are confident economic activity will accelerate in the second quarter of the year, also as consumer spending gets a tailwind from the massive savings from the lower gasoline prices in late 2014 and early this year. Most believe consumers saved the bulk of the windfall from cheaper prices at the pump and expect the money to be spent starting in March as temperatures warm up. "Consumers may have throttled back spending, but they maintain the ability and means to spend," said Jack Kleinhenz, chief economist at the National Retail Federation. "With the onset of warmer, spring-like temperatures and an earlier Easter, consumers will likely shake off the winter chills." The weakness in sales last month was fairly broad-based, underscoring the impact of the weather. Automobile sales tumbled 2.5 percent, the largest drop in a year. Sales at clothing stores were flat. Receipts at building material and garden equipment stores fell 2.3 percent, the biggest decline since May 2012. Sales at restaurants and bars slipped 0.6 percent, the largest fall in a year. There were also declines in furniture and electronic and appliances sales. Receipts at online stores, however, rose as did sales at sporting goods and hobby shops. A recent rise in gasoline prices lifted receipts at service stations, where sales rose 1.5 percent, the first increase since May. Gasoline prices rose about 9 cents in February. Prices at the pump had been dropping since July last year in tandem with falling crude oil prices.