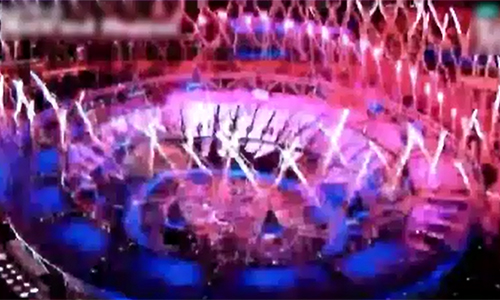 All the players and officials participated in the ceremony.

Addressing the ceremony, PCB chairman Shaharyar Khan said that Pakistan youths will learn a lot from the great players participating in the Super League.

He said that they would try to organize the second or third edition of the PSL in Pakistan.

PSL chairman Najam Sethi said that they had worked a lot to make the PSL a reality from a dream.

“I thank all the people who helped us to make it a reality. The world wants to see cricket. There is a lot of passion for cricket in Pakistan. We want to tell the world that Pakistan is a peaceful country,” he said.

He said that the one or two matches of the PSL would be played in Pakistan next year.

Talking to 92 News, former captain Saleem Malik said that the PSL was a golden opportunity for the Pakistani youth.

He said that the semi-final and final of the event should have been played in Pakistan. “The first match will be a mind game for coaches as compared to the players,” he added.