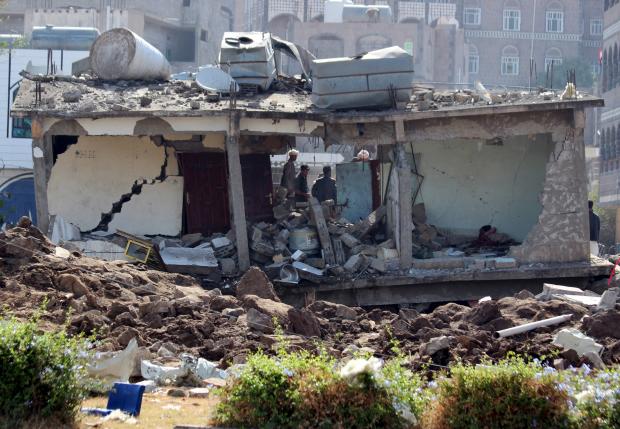 ADEN/DUBAI - Three weeks of fighting across Yemen may be pushing a country where Sunnis and Shi'ites have prayed in the same mosques for centuries toward a sectarian war. Most combatants deny they are motivated by religion in the conflict. Iran-allied Shi'ite Houthi rebels say they are leading a just revolution and Sunni Muslim Saudi Arabiacontends it has been bombing the Houthis to protect the Yemeni state. Militiamen from the south cite defence of their homeland. But there are signs that the sectarian hatred that has engulfed the Middle East since the Arab Spring uprisings of 2011 is creeping into Yemen's war, fueled by a rivalry between regional powers Saudi Arabia and Iran. Conflict and power struggles are not new to Yemen, one of the most heavily armed societies in the world. But the sectarian trend was captured on a video shared by YemeniFacebook users. A teenager sits blindfolded and cries, pleading to his captors that he is only 13. He was detained by militiamen while fighting for the Houthis in the southern city of Aden. "Why did you come here?" a Sunni gunman shouts. "We're here to defend our religion in jihad against the apostates and Houthis...you're not people, you're animals!" After nearly three weeks of airstrikes by Saudi Arabia and its Sunni Gulf neighbours who see the Houthis as Iranian puppets, Yemen risks being carved up along religious lines. "This scenario is likely if the war goes on. If young men continue to die, towns are invaded and homes shelled, the appeal of extremist religious groups will only grow," Mahmoud al-Salmi, a history professor at Aden University said. Houthis have been fighting what they call marginalisation by the state for over a decade. But the militia is now also motivated by a desire to eliminate the hardline Sunni al Qaeda from Yemen. As the chaos spreads, there is a danger that all sides will exploit their religious beliefs while settling old scores. The formerly independent and socialist South has long felt aggrieved by the North, not because it is home to the Zaydi sect of Shi'ite Islam, but because Southerners felt shut out of politics and oil resources that benefited northerners. "There's a strong feeling of oppression and humiliation that Northerners are invading. But since there's no leadership and no army, the armed groups lack discipline and this anger on regional lines could turn sectarian," al-Salmi said.   AL QAEDA TARGETS HOUTHIS Deadly attacks have mounted for months after Houthi fighters pushed beyond their traditional redoubts in the northern highlands last year and expanded their control. Al Qaeda, which specialised in carrying out bombings against Shi'ites in Iraq designed to foment sectarian conflict, has set its sights on Houthis. Al Qaeda gunmen boarded a bus in east Yemen last August, shooting and stabbing to death 14 off-duty troops for being "Houthi apostates". In the deadliest religious attack, Sunni suicide bombers claimed by Islamic State blew themselves up at two Houthi mosques in the capital Sanaa on March 20, killing 137 worshippers. The Houthis began a lightning push toward the southern city of Aden aimed, they said, not just at Saudi-backed president Abed-Rabbu Mansour Hadi but at Sunni militants they believe are his allies. "The largest element in the (pro-Hadi militias) was Al Qaeda," Abdel Malik al-Ijri, a member of the Houthi political bureau, told Reuters. The group denies receiving military support from Iran and says it fights on behalf of all Yemenis in a war that is more a struggle for the country's future than a feud between sects. Al-Ijri describes Yemen's conflict as exclusively political. But he acknowledges that some parties could exploit the sectarian element to push their agenda.   "MORE DANGEROUS THAN YOU THINK" Many southerners have long sought to secede from the north, and the Houthi onslaught may be their chance. Citizens have armed themselves to defend a tangled front stretching across hundreds of miles of southern coastline, mountains and deserts. Rallying calls for the southern cause are starting to feature religious overtones, as a statement from a group calling itself the "Southern Resistance" showed last week. "It's incumbent upon the sons of the south to unite their ranks...to defeat this malignant apostate aggression," it said. "Oh you Houthi apostates, things are more dangerous than you think and more serious than you believe. Your occupation of the south has opened a door that you can never close," it added. Al Qaeda is operating in its element -- an unstable Arab country with a weak state and growing sectarian sensitivities. It took advantage of the fighting and splintering in Yemen's army to briefly take over the Arabian Sea port of Mukalla last week, only to be driven back by tribal fighters. The group has for weeks fought alongside Sunni tribesmen against their common Houthi enemies. Firing up fellow Sunnis against the Shi'ite Houthis may get easier by the day if the complex war drags on. Decades-old disputes over land, power and resources are now blending with the sectarian tensions to create a combustible mix. "They are a sectarian, northern group aided by Iran that wants to occupy our lands and that's why we're fighting them," said Jamal al-Awlaqi, a tribal fighter in Shabwa province. "We won't accept that any stranger rules over us." - Reuters