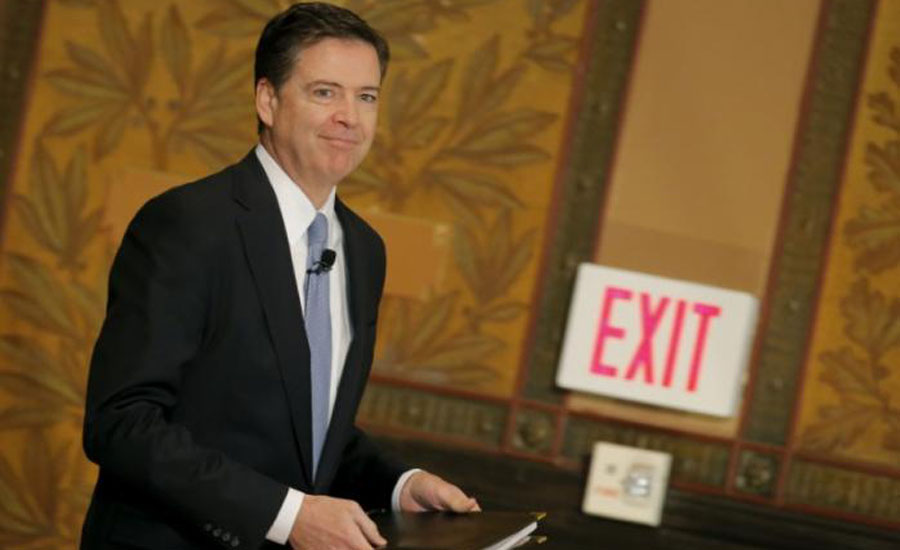 WASHINGTON - FBI Director James Comey, days before President Donald Trump fired him, told lawmakers he sought more resources for his agency's probe into possible collusion between Trump's presidential campaign and Russia to sway the 2016 US election, a congressional source said on Wednesday.

With the Republican president facing a storm of criticism from many Democratic lawmakers and some in his own party, the Trump administration accused Comey of "atrocities" on the job and denied his firing was related to the FBI's Russia investigation.

Trump, who met Russia's foreign minister at the White House on Wednesday, lashed out at critics, calling Democrats "phony hypocrites," and defended his decision to abruptly oust Comey on Tuesday from the law enforcement post he held since 2013.

In a farewell letter to staff seen by CNN, Comey, who was appointed by Trump's predecessor, Democratic President Barack Obama, said he had "long believed that a president can fire an FBI director for any reason, or for no reason at all."

Comey added he would not spend time dwelling on Trump's decision "or the way it was executed."

But Democrats ramped up accusations that Comey's removal was intended to undermine the Federal Bureau of Investigation probe and demanded an independent investigation into the alleged Russian meddling, with some calling the firing an attempt to cover up wrongdoing related to Russia.

A congressional source with knowledge of the matter said Comey told lawmakers within the past few days he had asked the Justice Department to make additional resources available - mainly more staffing - for the Russia probe.

Comey informed lawmakers of that request after the Senate Intelligence Committee, conducting its own investigation, had asked the FBI to speed up its Russia inquiry, the source said.

Responding to media reports that Comey had asked Deputy Attorney General Rod Rosenstein last week for a significant boost in resources for the agency's probe, Justice Department spokesman Ian Prior said in an email: "Totally false."

US intelligence agencies concluded in a January report that Russian President Vladimir Putin had ordered an effort to disrupt the 2016 election that included hacking into Democratic Party emails and leaking them, with the aim of helping Trump.

Russia has denied any such meddling. The Trump administration denies allegations of collusion with Russia.

Top US Republicans rallied to Trump's defence, but some called the action troubling. Republican House Oversight Committee Chairman Jason Chaffetz said in a statement on Wednesday he had requested a review by the Department of Justice's inspector general of Trump's decision to fire Comey, who had more than six years left in his 10-year post.

Comey's dismissal stunned Washington and plunged Trump deeper into a controversy over his campaign's alleged ties with Russia that has dogged the early days of his presidency, while also threatening to hinder his policy goals.

"He wasn't doing a good job, very simply," the Republican president said of Comey during a meeting with former Secretary of State Henry Kissinger in the White House Oval Office.

The administration said on Tuesday that Comey's firing stemmed from his handling of an election-year FBI probe into Democratic presidential nominee Hillary Clinton's use of a private email server during her time as secretary of state.

White House officials said Trump's anger at Comey had been building for months but a turning point came when the FBI chief refused to preview for top Trump aides his planned testimony to a May 3 Senate hearing on the Clinton email issue, an act Trump and his aides took it as an act of insubordination.

Trump had been considering letting Comey go "since the day he was elected" in November, White House spokeswoman Sarah Huckabee Sanders said. She referred to what she called Comey's "atrocities in circumventing the chain of command" at the Justice Department.

Many Democrats have criticized Comey's management of the Clinton investigation, but they questioned the timing of his dismissal, given that Trump could have acted soon after taking office on Jan. 20 and that he has repeatedly criticized the FBI and congressional probes into Russia's role in the election.

In a flurry of Twitter posts, Trump said Comey had "lost the confidence of almost everyone in Washington, Republican and Democrat alike." He added, "Dems have been complaining for months & months about Dir. Comey. Now that he has been fired they PRETEND to be aggrieved. Phony hypocrites!"

"We know Director Comey was leading an investigation (into) whether the Trump campaign colluded with the Russians, a serious offence. Were those investigations getting too close to home for the president?" Schumer said.

McConnell accused Democrats of "complaining about the removal of an FBI director who they themselves repeatedly and sharply criticized" and said a special prosecutor would impede existing probes like one under way in the Senate Intelligence Committee.

Paul Ryan, the Republican leader of the House of Representatives, told Fox News in an interview it was "entirely within the president’s role and authority" to remove Comey and that a special prosecutor was unnecessary.

Mark Warner, the intelligence committee's top Democrat, said he and the panel's Republican chairman, Richard Burr, had asked Comey to testify before the panel in private next Tuesday.

On Wednesday evening, the intelligence panel said it had issued a subpoena requesting documents from Trump's former national security adviser, Michael Flynn, in relation to its Russia probe. The committee said it had first requested the documents in a letter to Flynn on April 28.

Flynn was forced to resign in February for failing to disclose the content of his talks with Sergei Kislyak, Russia's ambassador to the United States, and then misleading Vice President Mike Pence about the conversations.

Trump said he had "a very, very good meeting" with Russian Foreign Minister Sergei Lavrov and they discussed Syria's civil war. Their meeting was the highest-level public contact between Trump and Putin's government since Trump took office.

During an earlier appearance at the State Department, Lavrov responded in a sarcastic tone when asked about Comey's dismissal, saying: "Was he fired? You're kidding. You're kidding."

In the Russian city of Sochi, Putin said Comey's firing would not have an impact on US-Russian relations.