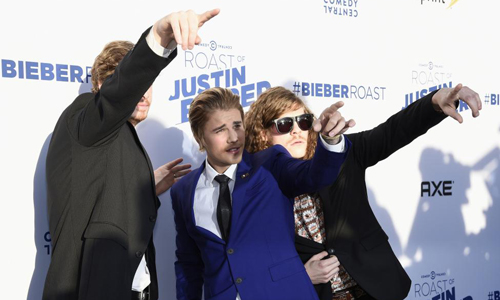 NEW YORK - Pop sensation Justin Bieber, the subject of some unflattering headlines in recent years, suffered the slings and arrows of fellow entertainers, from Kevin Hart to Martha Stewart, as they skewered his looks, music and public antics during a celebrity roast broadcast on Monday. Comedy Central's "Roast of Justin Bieber," hosted by Hart, got off to an edgy start, with Hart joking that most of superstar's Bieber's fans "are either in middle schools, or standing at least 500 feet away from one." Hart was also joined by Natasha Leggero, Pete Davidson, Shaquille O'Neal, Snoop Dogg, roast veteran Jeff Ross, Chris D'Elia and Ludacris in lambasting Bieber, 21, over a two-hour special taped in Los Angeles earlier this month. In keeping with the long tradition of celebrity roasts, off color, politically incorrect and borderline offensive jokes were the order of the day, mining everything from the Sept. 11 attacks to the Holocaust for humor. The N-word was in wide use. Referring to Bieber's many tattoos, O'Neal noted one of Jesus Christ and wondered, "Why you got to bring Jesus into this? That man has suffered enough." Snoop Dogg referenced another Bieber headline-making escapade involving the singer's pet monkey. "That monkey was more embarrassed than the one that started the AIDS epidemic," the rapper joked. The roasters targeted each other as much as they did Bieber, with cracks about Hart's diminutive stature, O'Neal's weight and appetite and the advancing ages of Stewart, Ludacris and Snoop Dogg, as well as Stewart's prison record. But they saved their sharpest barbs for Bieber, whom Hart described as having "the voice of an angel, and the haircut and tattoos of lesbian butchers." Bieber, who wore a blue suit and mostly chuckled at the jokes and occasionally clapped, got the last word, however. Bieber said he was "new to comedy, but here's a joke, all right? What do you get when you give a teenager $200 million? A bunch of has-beens calling you a lesbian for two hours." Turning serious, he noted he was "thrown into this at twelve years old," and that "through it all, I lost some of my best qualities. For that, I'm sorry." Vowing to "turn everything all around," Bieber said, "You have my word I will not end up broken, pathetic, bitter - or sitting on the dais at somebody else's roast. - REUTERS