Commander among six Fararis lay down weapons in Sibi 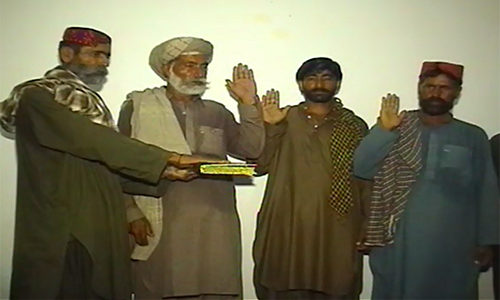 Commander among six Fararis lay down weapons in Sibi

SIBI (92 News) – Six Fararis, including their commander, belonging to a banned outfit laid down their weapons in Sibi on Thursday. Commander Jumma Khan with his accomplices took an oath of allegiance during a ceremony at FC Headquarters. Jumma Khan said that they had wasted their youths on the order of tribal chiefs. “We had to suffer losses due to shifting to mountains. We have fed up with the animals-like lives,” he added. Speaking on the occasion, DG FC Sibi Region Intisar Jaffery said that it is a good omen that Baloch brothers are joining the national mainstream. “There children would have been prosper had they done it before,” he maintained. He said that a large number of Fararis are joining the national mainstream and as a result, the dream of peace is coming true.