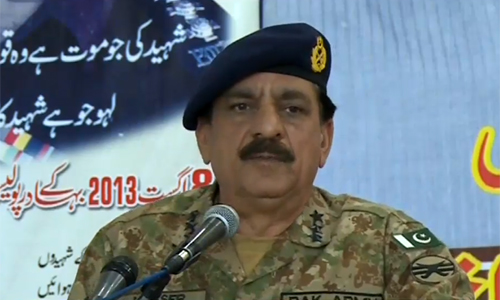 QUETTA (92 News) – Commander Southern Command Nasir Khan Janjua has said that only state can launch Jihad collectively. Addressing a ceremony held in connection with Yaum-e-Shuhda on Friday, he asked the heirs of the martyrs not to lose their heart. “Martyrs will welcome their heirs at the door of the Heaven.” He paid tributes to civilians, journalists, Edhi Razakars and law-enforcement agencies personnel who embraced martyrdom in Balochistan. He said that it is not part of the religion to declare a group opposing government policies Jihadi. He said that 17th December is an unforgettable day for him. “The estranged people are playing in the hands of people who do not want to see Islam flourishing. The country was created in the name of Allah and we had to fight against enemies jointly,” he maintained. He asked terrorists and saboteurs to mend their ways otherwise sobs of martyrs’ mothers will destroy them. Later, he gave away shields and cash prizes to the heirs of the martyrs.