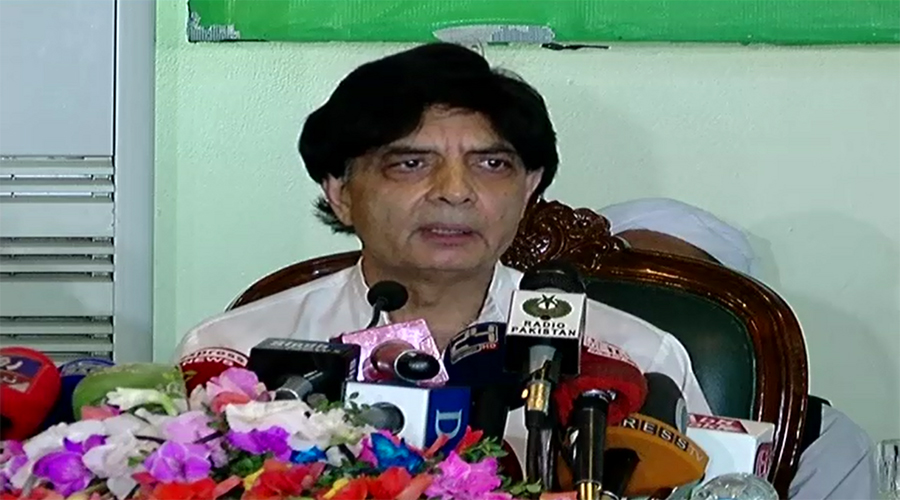 ISLAMABAD (92 News) – Federal Interior Minister Chaudhry Nisar while addressing a press conference in Islamabad on Thursday said that a high security meeting has been held to discuss Cyril Almeida's story published in Dawn regarding civil-military dialog on Oct 4 All Parties Conference (APC). Whoever leaked the news, would be brought to justice, he said. Nisar said that the high security meeting discussed if  the journalist’s name should be placed on the Exit Control List (ECL). "Complete investigations should be carried out before placing any Pakistani’s name on the ECL. All the facts regarding that story should be put forth," he said. "We denied the journalist’s story.  The story is an act of enemy against the government. Two more people are pointed out in the meeting. The main character was about to go abroad at around 9pm," he further said. "The CPNE and APNS have been called tomorrow in this regard. I agree with APNE that the issue should be resolved. We have made a committee to investigate the matter. The inquiry would be held without any pressure," he said. He further said, “Documents regarding arms have been found from Muttahida Qaumi Movement founder Altaf Hussain’s residence. There is surely a link between the arms recovered from Azizabad near nine zero and this list.” Earlier, he said that we need to work steadily for solving the problems of the country. "The E-passport service will begin before June next year. We aim to provide an easy service to the Pakistani citizens. I am not satisfied with Nadra’s attitude and standing in queues is painful," he said. In the first stage, around Rs 0.6 to 0.7 billion will be spent. We will spread the service across the country in two years. Overseas Pakistanis would be able to renew their passport from there, he added.