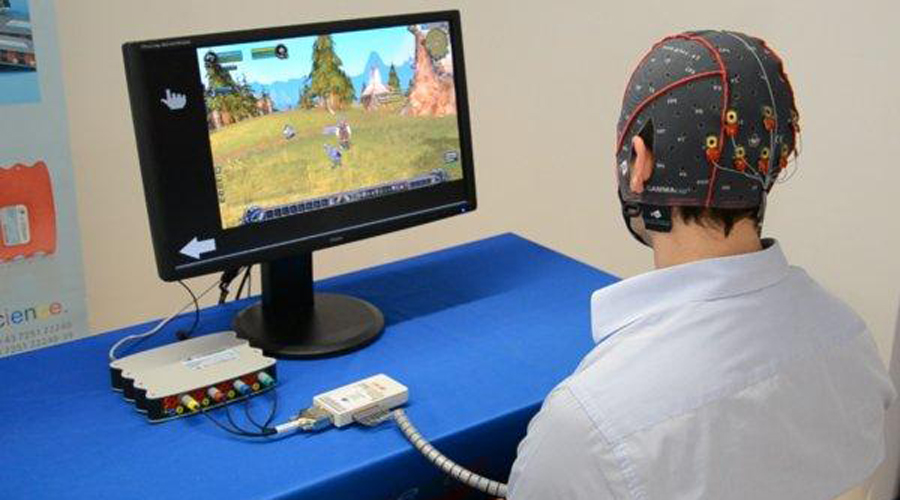 WASHINGTON – Doctors in the Netherlands say they have successfully tested an implantable computer-brain interface that allowed the mind of a "locked-in" patient to spell messages at the rate of two letters per minute. The system was tested on a 58-year-old woman in the late stages of amyotrophic lateral 08sclerosis, or ALS. Unable to speak or move her muscles, she had to identify the letters by imagining that she was moving her right hand. Previously, her only method to communicate was through eye movements and blinks. "We've built a system that's reliable and autonomous that works at home without any extra help. There's not a single system that even comes close to this," chief author Nick Ramsey of the Rudolf Magnus Brain Center at the University Medical Center Utrecht told Reuters Health by phone. Vikash Gilja, a professor of electrical and computer engineering at the University of California San Diego, who was not connected with the research, said the system used by the Ramsey team "does not push the envelope of performance, but that was not the purpose of the study. The news here is they have developed a system they fitted to one individual over a long time period and that individual was able to use it on their own without a lot of technical support."
"Those are major accomplishments," he told Reuters Health by phone. "It takes us a big step closer to real worldwide-scale clinical translation of an implanted brain-machine interface."
The hope is that such systems could eventually help others who can't move but whose brains are still capable of thought and communication, such as some stroke victims. The new research, presented November 12 at the annual meeting of the Society for Neuroscience in San Diego and published online by the New England Journal of Medicine, was an attempt to find a method that could be used continuously at home without discomfort or disfigurement. Detecting brain signals can be challenging because the brain generates a lot of electrical noise, and screening out the important signals can be a challenge. In this case, four sensor strips for detecting discharges from the cortex were placed over the hand region of the brain’s left motor cortex. The surgery was done through four burr holes drilled through the skull. Each strip had four electrodes. The leads were tunneled under the skin to an amplifier and transmitter anchored in the woman's chest. An antenna placed outside the body near the transmitter picked up the signals and conveyed them to the computer. Placement of the implanted equipment required two surgeries lasting a total of just under eight hours. Testing was done over 28 weeks. The researchers then moved to a training period where, for example, the woman tried to hit a target on a video screen by thinking about moving and relaxing her hand. There was also a key task where the woman tried to accomplish the equivalent of clicking on a mouse button trying to move her hand for about 1 second. When it came time to spell words, letters would be highlighted on a computer screen and the woman would try to "click" on the one she wanted. It took the researchers several months to refine their algorithms to inhibit unintended brain clicks. Results from eye tracking were used to confirm what the volunteer typed. Initially, the woman needed 52 seconds to identify one letter. "The time required dropped to 33 seconds per letter when word prediction was used," the researchers reported. At times, she can do up to four letters per minute. "The speed is not that important. It's the certainty with which you can express yourself," said Ramsey, who explained that the woman has come to rely on the system when she goes outdoors, where her eye tracking equipment doesn't always work. She can spell words directly without help and it gives her the ability to alert her caregiver that she needs assistance without relying on the caregiver noticing her eye movements. Such calls for help can be critical if her ventilator stops working properly or saliva is building up. "This is a significant advance in our field," Jonathan Brumberg, an assistant professor of speech-language-hearing at the University of Kansas, who was not connected with the work, told Reuters Health in an email. "It has significant advantages because the patient could use the device outdoors and with minimal dependency on others for setting up the device." –Reuters