DUBAI (92 News) - Mitchell Marsh shunned his usual aggression for patience during his 298-ball 162 as the Australians piled the runs on Pakistan A on the third day of their warm-up match on Monday, 1 October.
It was his ninth first-class century, six of which have come since the start of last summer, and importantly, as hard as the sweltering conditions were, Marsh showed no sign of succumbing to them. “If it took me the whole day to get my hundred, so be it,” he later said. He resumed the overnight partnership with his brother Shaun, and the two ended up adding 207 runs for the third wicket before Shaun was dismissed six short of his own ton. Travis Head then joined Marsh in the middle and scored a 200-ball 90*, with the Australians posting 494/4 by stumps, a lead of 216. Marsh said patience was the only way to score runs. “The conditions dictate that, it's a pretty hard wicket to score in front of the wicket on so you just had to be really patient," he said. “My game plan today was to be really patient and play every ball on its merits and if it took me the whole day to get my hundred, so be it. It was really nice to spend that time in the middle.” Marsh has worked on his batting too, and was delighted with the way he managed to tackle the sluggish surface at the ICC Academy ground in Dubai. 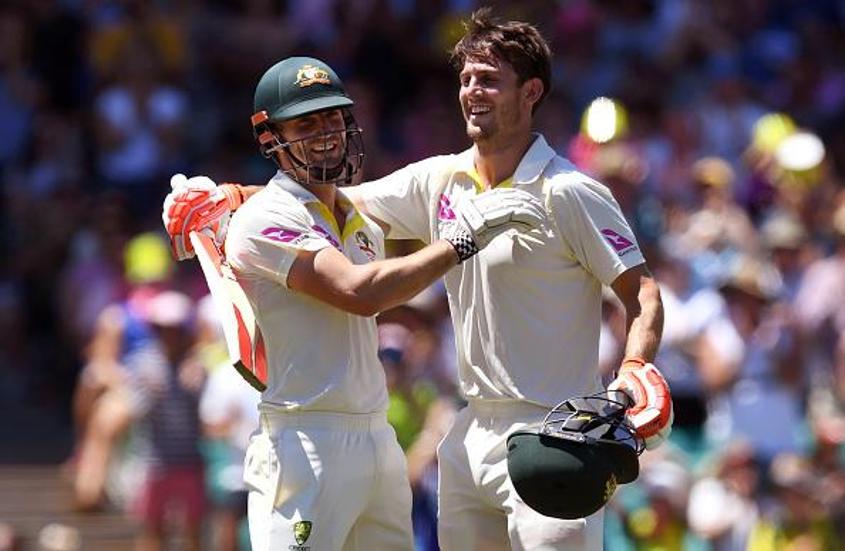 “I don't think I flicked a switch at any point, I just continued to work on my game and continued to improve,” he said. “There's certain elements of my game that have got better and it's nice to put them in place in the middle. “I've worked hard on having softer hands when playing spin in these conditions … playing the ball later and being really strong in my defence.” It was the perfect way for Marsh to warm up ahead of his first match as Australia Test vice-captain, but once again, he pointed out he would always be a leader, irrespective of that position. “When I was initially told the news, I was really stoked,” he said. “It’s a real achievement for me (to be) a leader in this team. (But) I’ve said a few times now that I don’t need a ‘VC’ next to my name to be a leader. I’m excited about what we can all achieve as a young group.” Marsh also had encouraging words for Head, with whom he shared a 106-run stand. "He's in really good form and in really good touch, he's proven over the last couple of years he can score big runs for South Australia," said Marsh. "He's ready to go. He's a great guy around the group. If he gets the opportunity, it'll be a really exciting for him."