Confident Pakistan geared up to rewrite history against India 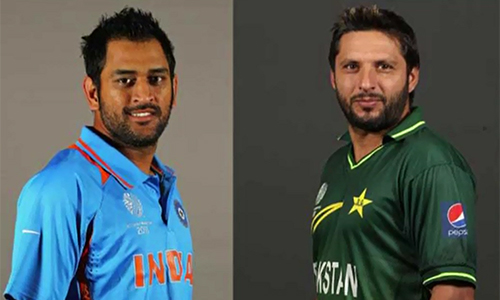 Confident Pakistan geared up to rewrite history against India

KOLKATA – Pakistan have never defeated India in a World Cup match but coach Waqar Younis is confident his team can break the jinx against the hosts who are smarting from a thumping defeat against New Zealand in their tournament opener. A defeat against their arch-rivals on Saturday at the Eden Gardens will push India towards an early exit from the World Twenty20 and Waqar feels it will be the best chance for Pakistan to end their poor record against their neighbours. Pakistan, on the other hand, got off to a confident start in the tournament with a win against Asian rivals Bangladesh. "They (Indians) have lost the last game, they must be worried that they can go out of the tournament, that's a huge worry when you are playing in your own country in such a huge tournament," Waqar told reporters. "I am sure that they are feeling the heat. It is an added pressure on them, not on us. And in Kolkata, as I said, we have played really well in the past, and we have won the last game. "I think that the monkey is off our backs now, so hopefully we will deliver the goods." Bilateral cricketing ties between the neighbours remain suspended after gunmen killed 166 people in Mumbai in a three-day rampage in 2008. While India off-spinner Ravichandran Ashwin called a match between the two countries as a bigger contest than the traditional rivalry of the Ashes, which involves Test matches between England and Australia, Waqar said the cricketers should be proud of the rivalry. "I think first of all, you have taken it as a sport," the former fast bowler added. "Our rivalry is definitely there, there is a history between Pakistan and India, not only culturally but also there is a cricket history given how we have played each other for 50 years. "No other game is watched as much as this one, so we should all cherish that and we should all feel proud about it." Ashwin said India are well versed with handling pressure and have left behind the defeat against New Zealand. "I don't think we really see a lot of pressure in this game. We are used to playing a lot of that for India," Ashwin said. "Every game that India plays is a pressure game as you can see with the amount of people here (at the news conference). "A game like this... more than who we are playing against, it's the T20 World Cup and we have almost put ourselves in a position where we have to win every game from here. I think that's more important and pertinent," he added. –Reuters