In Congo city where Ebola resides, fear but not panic 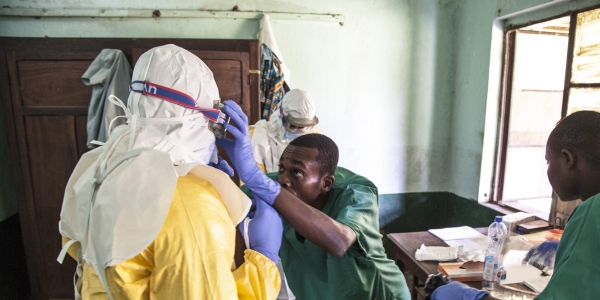 In Congo city where Ebola resides, fear but not panic

MBANDAKA  (Reuters) - In the city of Mbandaka in northwest Congo, Mbombo Roge does not shake hands with friends anymore: Ebola changed all that. Roge simply bowed when he met a group of friends afternoon, obeying one of the key lessons taught by health officials since an outbreak of the deadly virus was confirmed in the city of 1.5 million people this week. “Ebola doesn’t forgive,” said Roge on a street in the center of Mbandaka “We just greet each other with words so as to not get contaminated.” The outbreak of Ebola in Congo, the vast central African country’s ninth since the disease made its first known appearance near the northern Ebola river in the 1970s, is believed to have cost the lives of 25 people since April. The outbreak is dwarfed by the epidemic which killed over 11,300 in Guinea, Liberia and Sierra Leone between 2013 and 2016, but it brings with it some worrying echoes. The first confirmed case in Mbandaka on Thursday raised concerns it could spread much faster than in the rural areas where it had previously been detected. Mbandaka, a crowded trading hub on the banks of the Congo River where people live in close proximity, has road, water and air links to the capital Kinshasa, whose population is 10 million. Since Thursday, three other cases have been confirmed in Mbandaka. The World Health Organization (WHO) has declared a “very high” public health risk to the country since those cases were detected. Over 4,000 vaccines are expected to be deployed to the region early next week. The Ebola virus causes hemorrhagic fever and is spread through direct contact with body fluids from an infected person, who suffers severe bouts of vomiting and diarrhea. So far, the changes in Mbandaka are subtle, but they point to a growing trepidation. At the small regional airport, health inspectors check the temperature of arriving passengers. Local aid agencies have gone to churches and schools to try to educate people of the dangers. Soap dispensers have been put outside some local businesses so people can wash their hands before entering. Meat sales at riverside markets have dropped off, traders say, because of the fear of eating contaminated bush meat which can pass Ebola on to humans. “We are scared of this epidemic. We can’t make contact with people coming from outside,” said border hygiene inspector Bolongoyi Juptie. Not everyone is convinced of the dangers, and one resident said that Ebola can be cured through prayer. But the general wariness is encouraging for health officials who remember how mistrust of doctors, nurses, authorities and western aid agencies made containment more difficult during the 2013-16 epidemic. “There is a need to increase awareness,” said Joseph Bolongo, former project manager at the NGO Gashe and local resident, “so that ignorance does not facilitate the spread of the disease.”