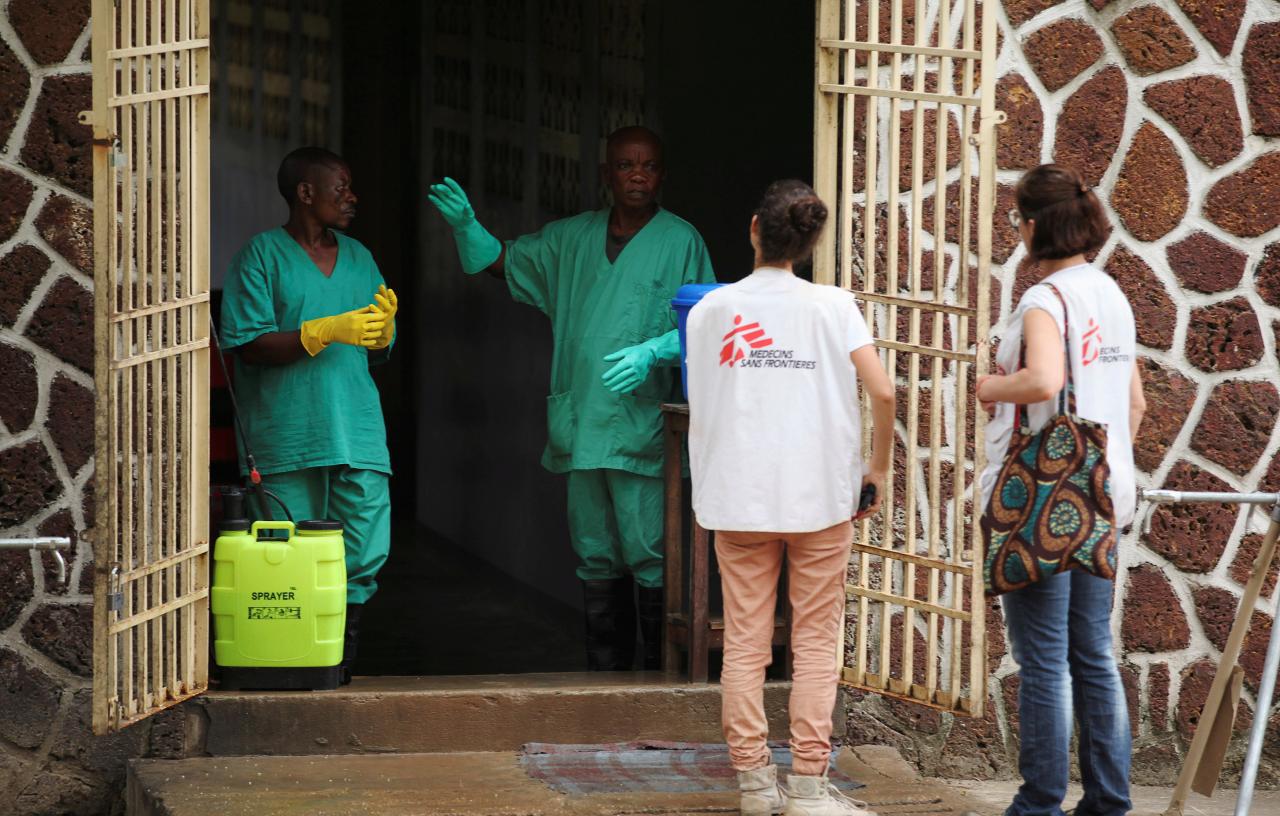 GOMA (Reuters) - Four people have tested positive for Ebola in eastern Democratic Republic of Congo just days after another outbreak that killed 33 people in the northwest was declared over, the health ministry said . Twenty people have already died from hemorrhagic fevers in and around Mangina, a densely populated town about 30 km (18 miles) southwest of the city of Beni and 100 km from the Ugandan border, the ministry said in its statement, without saying when the deaths occurred. A team of 12 experts from Congo’s health ministry will arrive in Beni on Thursday to set up a mobile lab, the ministry said. The World Health Organization has started moving staff and supplies to the area, WHO chief Tedros Adhanom Ghebreyesus said. They head to a region where deep security problems could complicate efforts to contain the virus. About 1,000 civilians have been killed by armed groups and government soldiers around Beni since 2014, and the wider region of North Kivu holds over 1 million displaced people. “This is an active conflict zone. The major barrier will be safely accessing the affected population,” Peter Salama, WHO Deputy Director-General of emergency preparedness and response, said in a statement. Jeremy Konyndyk, an aid expert at the Center for Global Development, said other recent Ebola outbreaks had fortunately been in relatively safe and stable areas. “North Kivu is a different story, which makes me a little nervous,” he said. The area also has strong trade with neighboring Rwanda and Uganda, raising the risk of the virus moving internationally. Julie Hall, chief of staff at the International Federation of the Red Cross, said the Ebola response in North Kivu would be a “highly complex” operation. The ministry said no evidence linked this outbreak with the last one, which began in April and occurred over 2,500 km (1,553 miles) away in northwestern Congo.

This is the central African country’s 10th outbreak since 1976, when the virus was discovered near the eponymous Ebola river in the north. That is more than twice as many as any other country. Ebola is believed to be spread over long distances by bats and can turn up in bush meat sold at food markets throughout Congo. Once present in humans, it causes hemorrhagic fever, vomiting and diarrhea and is spread through direct contact with body fluids. An outbreak concentrated in the West African countries of Sierra Leone, Liberia and Guinea killed at least 11,300 people between 2013 and 2016. Congolese and international health officials were credited with responding rapidly to the last outbreak, including by deploying an experimental vaccine manufactured by Merck, one of several vaccines being developed against Ebola. But the Merck vaccine is designed to be used against the Zaire strain of Ebola, and there has been no confirmation of the strain in the latest outbreak, with the WHO calling it only “presumptive Ebola”. A WHO spokesman declined to comment on possible vaccine use. Aside from the vaccine, the key factors in halting the previous outbreak appeared to be aggressive tracing of potential patients and the speed of the response. The WHO said the fact that it already had staff and equipment in place would give it a head start against the new outbreak. “Ebola is a constant threat in DRC. What adds to our confidence in the country’s ability to respond is the transparency they have displayed once again,” WHO head Tedros said. “We will fight this one as we did the last.”