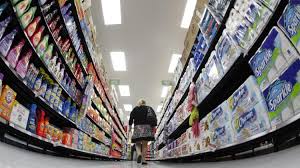 WASHINGTON (Reuters) - The US economy likely grew at its fastest pace in four years in the second quarter as consumers boosted spending and farmers rushed shipments of soybeans to China to beat retaliatory trade tariffs before they took effect in early July.
Gross domestic product probably increased at a 4.1 percent annualised rate, also as business stockpiled inventory ahead of the impending import duties, according to a Reuters survey of economists. That would be strongest performance since the third quarter of 2014 and put the economy on track to achieve the Trump administration’s target of 3 percent annual growth. Ahead of Friday’s release, President Donald Trump and members of his economic team have been promoting the notion that second-quarter growth will be robust. Earlier in the week he tweeted that the United States has “the best financial numbers on the planet.” Along with its snapshot of second-quarter GDP growth, the report will likely include a revision of the first quarter’s growth estimate of a 2.0 percent rate as the government will also publish comprehensive revisions to prior GDP data. “Ironically, the threat of a trade war appears to have bolstered activity in the second quarter,” said Michelle Girard, chief economist at NatWest Market in Stamford, Connecticut. The United States slapped 25 percent duties on $34 billion worth of Chinese goods effective July 6, provoking a similar response from Beijing, which targeted soybeans and other agricultural products as well as US-made cars. Trump has also imposed tariffs on steel and aluminium imports, leading to retaliation by the United States’ main trade partners, including Canada, the European Union, Mexico and China. There was also a front-loading of exports of other goods in the second quarter. With the trade-related boost expected to unwind in the second half of the year, economists caution against putting much weight on the April-June quarter growth. Excluding the tariffs-related bump, analysts estimate the economy probably grew at a 2.5 percent pace in the second quarter. “The real issue is what is the underlying strength and what is temporary,” said Sung Won Sohn, chief economist at SS Economics in Los Angeles. “Going forward it’s quite likely that we could see economic growth slowing from this sizzling rate in the second quarter.” The economy will this year be supported by a $1.5 trillion tax cut package and increased government spending in the last quarter. But the stimulus is expected to fade sometime next year. The import duties are seen undercutting economic growth, with higher prices for goods discouraging consumer spending and businesses shelving investment plans. For now, strong growth in the second quarter will keep the Federal Reserve on course to raise interest rates two more times this year. The U.S. central bank increased borrowing costs in June for the second time this year and forecast two more rate hikes for 2018. While there is broad agreement the economy performed well in the second quarter, economists have begun to question whether it can continue at this pace in the face of trade tensions and rising rates. Economists in a Reuters poll earlier this week predicted that growth will slow notably from here. EXPORTS FRONT-LOADED Growth in consumer spending, which accounts for more than two-thirds of U.S. economic activity, is forecast accelerating from the first quarter’s lethargic 0.9 percent rate, which was the slowest in nearly five years. Consumer spending is being driven by the lower taxes and a robust labour market, which created an average of 215,000 jobs per month in the first half of this year. The front-loading of deliveries of soybean and other goods probably boosted export growth in the second quarter and offset a tariff-induced increase in imports. That is expected to have sharply narrowed the trade deficit. Trade is forecast to have contributed at least 1.5 percentage point GDP growth in the second quarter after being neutral in the January-March period. The import duties also likely prompted businesses to increase their pace of inventory accumulation. Inventory investment probably added to output after making no contribution in the first quarter. Another quarter of solid business spending on equipment is expected, though the pace has slowed from the double-digit growth experienced in the second half of 2017. The trade wars are casting a pall on the business spending outlook. General Motors Co (GM.N), Ford Motor Co (F.N) and Fiat Chrysler Automobiles NV (FCHA.MI) (FCAU.N) on Wednesday cut their full-year profit forecasts, citing higher steel and aluminium costs. Harley-Davidson Inc (HOG.N) has warned that more expensive steel and aluminium and a 25 percent retaliatory duty imposed by the European Union on shipments from the United States could cost the motorcycle maker $45 million to $55 million this year. “To keep the economy growing, the swing factor always is whether U.S. companies are confident enough in the outlook to keep investing in the country’s future,” said Chris Rupkey, chief economist at MUFG in New York.