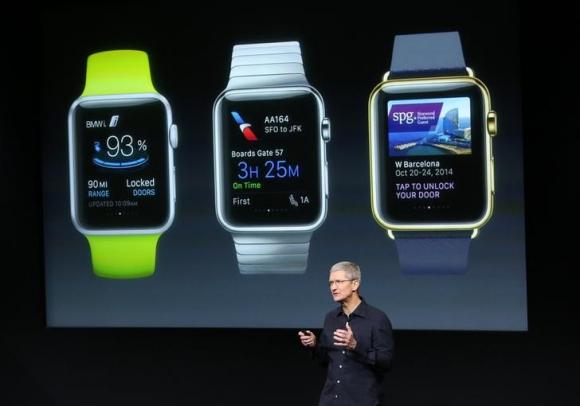 (Reuters) - Apple Watch will replace your car keys and its battery will last the whole day, Apple Inc's (AAPL.O) Chief Executive Tim Cook told the Telegraph in an interview. The watch is designed to replace car keys and the clumsy, large fobs that are now used in many vehicles, Cook told the newspaper. Its battery will last the whole day, and will not take as long to charge as an iPhone, the report quoted Cook as saying. Apple Watch will also work as a credit card through Apple Pay, Cook told the paper, but did not mention how user verification will work with the watch. The rollout of the watch might pose a challenge for Apple's stores, which may involve "tweaking the experience in the store," the Telegraph said, citing Cook's conversation with the staff at Apple's Covent Garden store in London. Last March, Apple unveiled CarPlay, which lets drivers access contacts on their iPhones, make calls or listen to voicemails without taking their hands off the steering wheel. Earlier this month, Reuters reported that the iPhone maker is looking at making a self-driving electric car, and is talking to experts at carmakers and automotive suppliers. In the interview, Cook said that the Apple Watch will operate a special rewards system, track the user's activity and "be correct to 50 milliseconds". Apple was not immediately available for comment. The company has scheduled a special event on March 9, where it is expected to showcase Apple Watch, which will be launched in April.