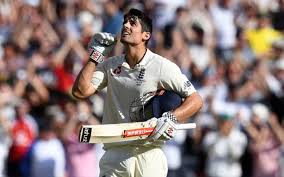 CHRISTCHURCH (Reuters) - Alastair Cook’s third successive dismissal to New Zealand left-armer Trent Boult on Friday will undoubtedly raise questions as to whether the former captain may look to end his illustrious career. Cook again failed to move his feet to the moving ball in the first innings of the second test and Boult exploited it when the opener did not get forward to negate a delivery that pitched on middle and cannoned into off stump. Boult also had Cook caught behind the wicket twice in the first test, which New Zealand won by an innings and 49 runs to take a 1-0 lead in the two-match series. Despite having scored more than 12,000 test runs at an average of 46.02, the 33-year-old Cook has appeared woefully out of form since England arrived Down Under for their dual tours of Australia and New Zealand. He managed 376 runs in nine innings during the 4-0 Ashes loss, but a massive unbeaten double century in the drawn fourth test in Melbourne was an outlier with six under-20 scores. In New Zealand, he has scored nine runs in three innings and his decline in the Antipodes is symptomatic of his past 12 months. He scored a total of 899 runs in 20 innings in 2017 at a healthy average of 47.31. However, 487 of those runs were courtesy of 243 against West Indies at Edgbaston and his 244 not out against Australia. Taking those two innings out he averaged just 22.89. Cook shot down talk of retirement during the Ashes, particularly when he played his 150th test in the third game in Perth but said while he was working hard he recognised he was not scoring runs. He then broke his drought with the massive double century at the MCG, which in no small way ensured England were not swept 5-0 as the hosts batted out a draw. Cook added 39 and 10 in the final test in Sydney before he returned home to England as the limited overs series began, then rejoined the team in New Zealand ahead of the tests. His struggles, however, have continued and he may be looking forward to getting home for some rest for a few weeks. England face Pakistan in May before they host India for five tests, three one-day internationals and three Twenty20 matches from July. Whether Cook will be there is unlikely to be a drawn out affair, at least if he has a say in the matter. “It does take a lot of effort to perform, playing for England,” he told BT Sport before the Perth test last December. “It’s a huge amount of sacrifice to do and one day I might just wake up and say ‘you know what, I’m done with it’.”