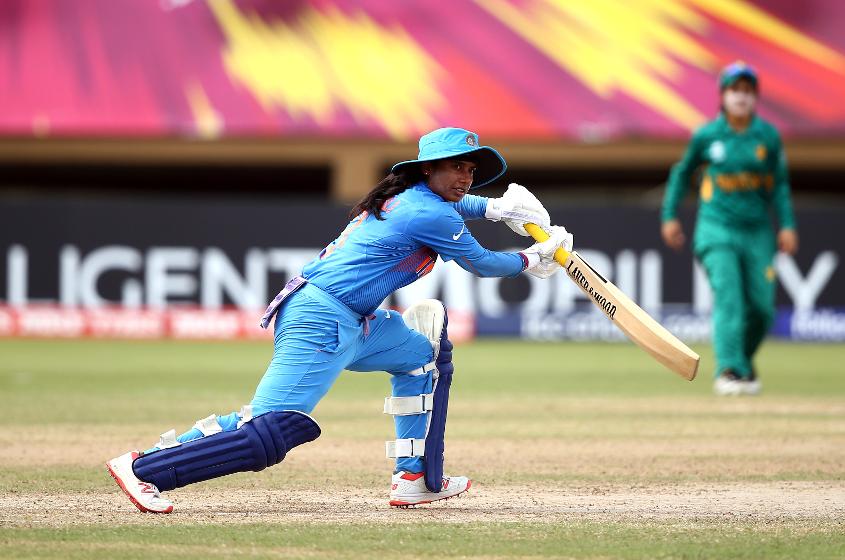 GEORGETOWN (Web Desk) – India overcame a case of butterfingers to register a dominant seven-wicket win against Pakistan at the Guyana National Stadium. India overcame a case of butterfingers to register a dominant seven-wicket win against Pakistan at the Guyana National Stadium. After some fine batting from Pakistan’s middle order took them to 133 for seven, India’s top order knocked those runs off in the 19th over. India’s chase was made easier by 10 penalty runs awarded to them at the start of their innings. Those undid some record-breaking batting from Pakistan, who scored their highest T20I total against India, their previous best effort being 104. India chose to field first after winning the toss, Harmanpreet Kaur swayed by some moisture on the pitch. The decision looked like a sound one as good bowling and some sharp fielding reduced Pakistan to 30 for two after six overs, the openers falling to a smart catch at slip and a direct hit run out. But India’s fielding disintegrated after that, as they dropped four straightforward catches over the course of the innings, allowing Pakistan to build momentum. Nida Dar prospered from two of those chances (dropped on 15 and 29) and Bismah Mahroof from one (dropped on 28), and both combined for a fourth wicket partnership of 94 off 71 balls. It was Pakistan’s best partnership against India in T20Is. Both batters set personal bests on the way, Mahroof (53, 49b, 4x4) getting the highest score for Pakistan against India, and Dar (52, 35b, 5x4, 2x6) her first fifty in T20Is. Their efforts were dented though as 10 penalty runs were awarded to India due to the Pakistan batters running on the pitch twice after being officially warned by the umpires. Poonam Yadav (2 for 22) took two wickets in the final over of the innings to finish the pick of the bowlers. With the ball, Pakistan were unable to exert any pressure as Mithali Raj, freshly returned to the top of the order, scored a silken 56 (47b, 7x4). Mithali dominated in a 73-run opening partnership with Smriti Mandhana (26, 28b, 4x4). With her 15 T20I fifty, Mithali became the third batter to score more than 500 T20I runs in 2018. She added a further 28 runs with Jemimah Rodrigues (16, 21b, 1x4), before being dismissed in the 18th over with India eight short of the target. Three Pakistan bowlers picked up a wicket each. India will play Ireland next on 15 November, while Pakistan will face the same team two days earlier, on the 13th.