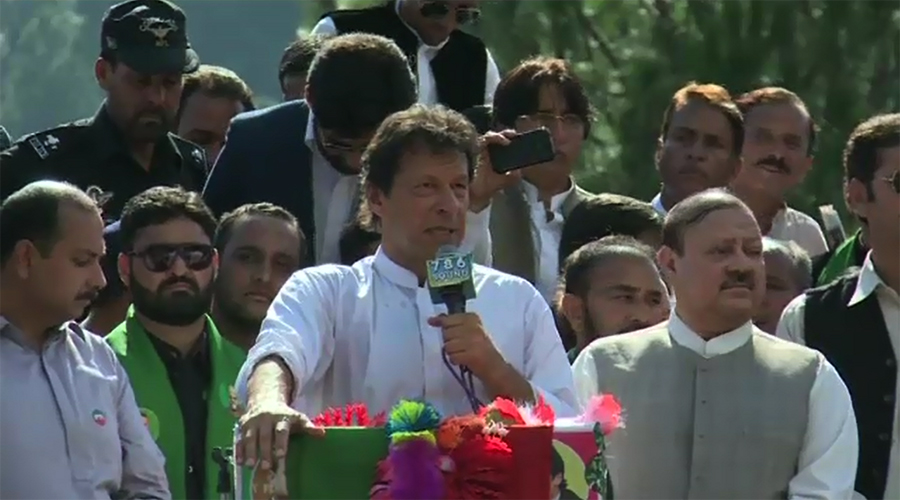 MUZAFFARABAD/BAGH (92 News) – PTI chairman Imran Khan has said that corruption cannot be eliminated till accountability of Nawaz Sharif. Addressing a public meeting on Monday, he said that it was time to change to thought. Criticizing PPP co-chairman Asif Zardari, he said that a thief cannot hold another thief accountable. “The country’s biggest problem is corruption. The country is heading towards destruction,” he said. Imran Khan said that the country head destroys the system from top to bottom by pilferage. He said that the NAB was arresting low-ranking officers till now. “Corruption will end when the NAB will be freed,” he added. The PTI chairman said that there were 13 cases of Nawaz Sharif in the NAB and why they were not being heard. He maintained that the accountability process cannot be completed due to status quo in the country. “I promise all the people that I will get them justice,” he added. The PTI chairman said that Nawaz Sharif would not speak for the Kashmiris as he had business interests in India. “Pakistan faces a threat from the kingship of Nawaz Sharif, not the Army,” he said.   He said that it was a matter of shame that the prime minister could not make a single hospital where he could get treatment. Imran Khan said that the people would have to defeat the corrupt leadership. “I will travel across the country and prepare the people to face the corrupt leaders,” he said.