Cosby lawyers seek to bar his testimony from assault trial 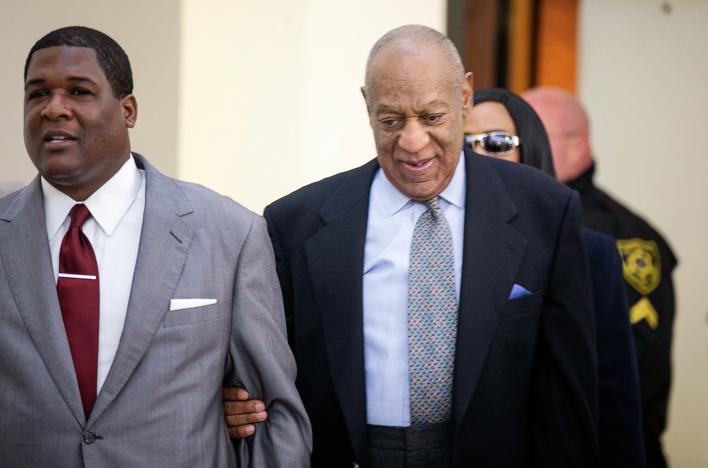 Cosby lawyers seek to bar his testimony from assault trial

NORRISTOWN - Bill Cosby's lawyers asked a Pennsylvania state judge to prevent jurors at his assault trial from hearing potentially damaging testimony he gave under oath in 2005. Lawyer Brian McMonagle argued at a hearing in Norristown that a former Montgomery County prosecutor had promised never to prosecute Cosby over allegations by Andrea Constand, a former basketball coach at Cosby's alma mater Temple University, that he attacked her at his Pennsylvania home in 2004. Without that assurance, McMonagle said, Cosby would never have agreed to sit for a deposition in Constand's civil lawsuit in which he admitted giving drugs to various women before engaging in sexual acts. Constand's case is the only one out of more than 60 to result in criminal charges. Cosby has repeatedly denied any wrongdoing. Prosecutors responded to McMonagle by saying that the promise was never confirmed in writing and argued that Cosby's lawyers did not reasonably rely on the so-called "promise" in any case. The two-day hearing before Judge Steven O'Neill of the Montgomery County Court of Common Pleas addresses several disputes leading up to the trial scheduled for June. They include the prosecution's request to call as witnesses more than a dozen women who have accused Cosby. The 79-year-old comedian, once beloved by Americans as the father on the 1980s TV hit "The Cosby Show," has been accused by the women of sexually assaulting them, often after plying them with drugs and alcohol, in a series of attacks dating back decades. Cosby, who is legally blind and has trouble walking, wore a dark suit and appeared attentive throughout the hearing. The morning session focused on Cosby's sworn testimony in Constand's 2005 civil lawsuit. Cosby's lawyer McMonagle said his client would have invoked his constitutional right to avoid self-incrimination absent the promise from former county District Attorney Bruce Castor. "This was a sitting district attorney saying, 'I’m not going to prosecute your client, ever,'" McMonagle said. But Assistant District Attorney M. Stewart Ryan said Castor's own testimony on the matter at a hearing in February was riddled with inconsistencies. Ryan said that Castor also could not remember occasions on which he appeared to tell reporters that the investigation could be reopened in the future. -Reuters