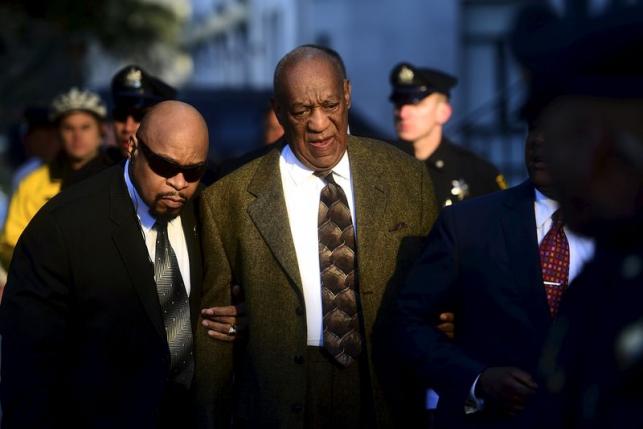 NORRISTOWN, PA. – Bill Cosby went to court on Tuesday for a hearing at which his lawyers planned to argue that sexual assault charges against the disgraced comedian violate a former prosecutor's decade-old agreement not to charge him.

Cosby, 78, wore a dark suit and was accompanied by his attorneys and what appeared to be a security guard as he walked past a scrum of photographers and reporters into the criminal court in Norristown.

Cosby, once of the entertainment world's most popular comedians and actors, was charged in December with the 2004 assault of Andrea Constand, a former women's basketball team manager at Temple University in Philadelphia, Cosby's alma mater.

More than 50 women have accused Cosby of assaults stretching back decades but the prosecution brought by the Montgomery County district attorney's office is the only criminal case he has faced. Constand, now 44, said Cosby plied her with drugs and alcohol before sexually assaulting her.

Under that deal, Cosby's lawyers say, Castor promised not to prosecute Cosby over Constand's allegations if he agreed to testify under oath in a civil lawsuit she filed against him.

A judge last year unsealed that testimony, in which Cosby acknowledged giving her Benadryl, an anti-allergy medication, but portrayed the encounter as consensual. Prosecutors are generally free to use civil depositions as evidence in criminal cases.

Castor is prepared to testify that he told Cosby's lawyers he would not bring charges in exchange for the testimony, according to court papers.

But prosecutors have said in court filings that no documentation exists to corroborate any such agreement. Moreover, they argue, Castor did not have the authority to bar his office forever from pursuing criminal charges against Cosby.

The Constand allegations played a crucial role in last year's campaign for district attorney, which pitted Castor against Kevin Steele.

Steele, who attacked Castor during the race for failing to prosecute Cosby, won election in November and then charged Cosby just before the statute of limitations expired. –Reuters