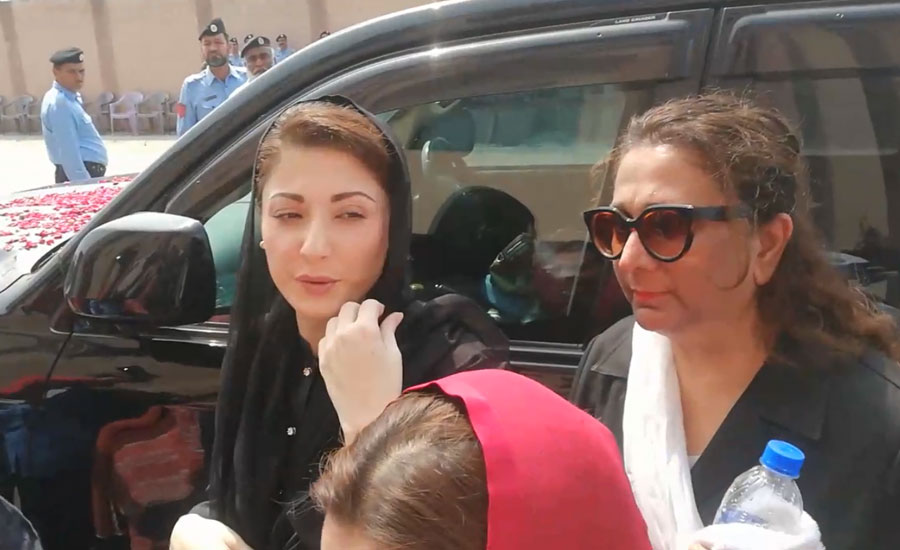 ISLAMABAD (92 News) – The Islamabad accountability court on Friday rejected the National Accountability Bureau (NAB) plea against Maryam Nawaz, daughter of incarcerated prime minister Nawaz Sharif, for submitting fake trust deed in Avenfield reference. Maryam Nawaz appeared before the accountability court. Judge Muhammad Bashir presided the hearing. The court declared the petition non-maintainable and ruled that no action can be taken in this regard until the decision of Islamabad High Court (IHC). During the hearing, NAB prosecutor Sardar Muzzafir read the verdict of Avenfield reference regarding indictment. He argued that Maryam Nawaz never challenged this verdict in any court. On the occasion, Maryam Nawaz tried to reply but the judge stopped her and remarked, “Let speak your lawyer.” Maryam’s lawyer Amjad Pervez argued that this case is being under Islamabad High Court. Later, the court declared the plea of NAB as inadmissible. Wearing shirt having words ‘Free Nawaz Sharif’, Maryam Nawaz arrived at the court amid PML-N workers’ slogans against incumbent government of Pakistan Tehreek-e-Insaf (PTI). Maryam Nawaz was accompanied by her husband Captain (retd) Mohammad Safdar, Marriyum Aurangzeb, Pervez Rashid and Sadia Abbasi. Dozens of PML-N workers were also present at the premises to support their party leader. Ahead of PML-N vice president’s appearance, strict security measures were put in place outside the judicial complex. Rangers personnel also deployed to avoid any untoward situation and any irrelevant person would not be allowed to the jurisdiction of the accountability court. Maryam Nawaz’s court appearance came a day after former prime minister and PML-N leader Shahid Khaqan Abbasi’s arrest from NAB in relation to the LNG case. https://www.youtube.com/watch?v=0E83nMzMEzk Earlier on July 9, an accountability Court in Islamabad has summoned Pakistan Muslim League-N (PML-N) leader Maryam Nawaz in Avenfield reference on July 19 for submitting fake trust deed. The NAB had claimed that the trust deed submitted by Maryam Nawaz was forged, and requested the court to start trial against the PML-N leader. NAB Deputy Prosecutor General Sardar Muzaffar Khan Abbasi had filed the application, seeking action against Maryam Nawaz for producing a bogus trust deed before the accountability court in order to conceal the London properties. NAB application read, “The above conclusion [that the document used was bogus] by this court was reached after evaluating the entire evidence; hence, it is apparent that the respondent has maliciously fabricated and tendered false evidence/information with the intention to mislead the due process of law and trial and hamper the administration of justice.” The judge inquired from the prosecutor on what grounds the court would proceed in this matter. Abbasi, in response, pointed out that the judge had the power to initiate action against Maryam Nawaz under Section 30 of the National Accountability Ordinance (NAO), 1999 read with serial number three of the Schedule of NAO, 1999. On July 6, 2018, accountability judge Mohammad Bashir had convicted former premier Nawaz Sharif and his daughter Maryam Nawaz in Avenfield properties reference and sentenced them 10 years and 07 years imprisonment, respectively.