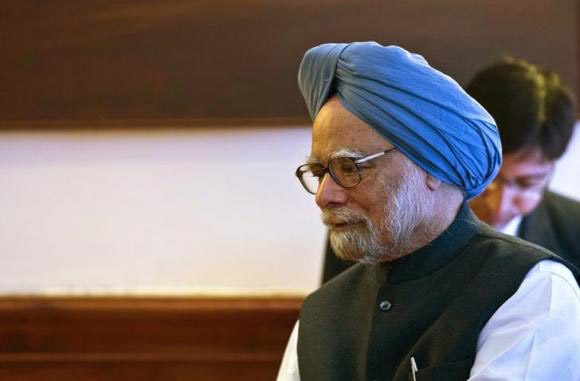 NEW DELHI - An Indian court summoned former Prime Minister Manmohan Singh on Wednesday over accusations of criminal conspiracy and corruption over the award of a coal field during his term, in a blow for the Gandhi dynasty that ruled India until last year. A special court under the Central Bureau of Investigation summoned the former prime minister along with billionaire Kumar Mangalam Birla and another official to appear on April 8, a source at the agency said. "I am upset, but this is a part of life," the mild-mannered 82-year-old told reporters at parliament, where he is a member of the upper house. Singh has not been charged with any crime but is being investigated for criminal breach of trust, criminal conspiracy, cheating and corruption, a lawyer for the prosecution said on condition of anonymity. The maximum sentence for criminal breach of trust is life imprisonment. Singh is a respected economist credited with 1990s free-market reforms that unshackledIndia from its socialist past. Recognizable in his trademark blue turban, glasses and beard, he played a prominent role managing the 2008 financial crisis. Singh ruled as prime minister with a coalition led by the Gandhi dynasty's Congress party. His second term was mired in corruption scandals and accusations that party leader Sonia Gandhi called the shots in his government, tarnishing his image. "We have done nothing wrong and we have nothing to hide," said Ambika Soni, a senior Congress leader close to the Gandhis. The Gandhi lineage stretches back to India's first prime minister, Jawaharlal Nehru. The family ruled for much of the period from independence in 1947. AWARDS OVERTURNED Most coal block awards made by Singh's government, which ran India for a decade, were overturned late last year by the Supreme Court, which ruled the process illegal. The case known as "Coalgate" came to light in 2012 after a government auditor said the exchequer had lost as much as $33 billion because of collusion between officials and private firms to depress the cost coal field awards. Prime Minister Narendra Modi's government, which ousted the Singh administration last May, is now in the process of re-auctioning the fields in a process key to reducing India's heavy dependence on coal imports. Auctions of the first 32 blocks have brought in a projected $32 billion, Coal Secretary Anil Swarup told Reuters. "In the UPA regime there was ... ad-hocism that prevailed, favoritism that prevailed," said GVL Narasimha Rao, a spokesman for Modi's Bharatiya Janata Party, referring to the former ruling coalition. The summons relates to a coal field allocated in 2005 to Hindalco Industries (HALC.NS), part of the $40 billion Aditya Birla Group. Kumar Mangalam Birla is the chairman of the group. The company declined to comment. The summons from the CBI court comes at a time when Congress is making Modi's life difficult by blocking economic reform laws in parliament. In the past, the Supreme Court has accused the CBI of acting on the wishes of the government.