KARACHI (92 News) – Prime Minister Nawaz Sharif reached Lahore after the Karachi tour on Friday. Sindh Chief Minister Syed Murad Ali Shah saw him off at the airport. He also held meetings with several dignitaries at Governor’s House. Earlier, Prime Minister Nawaz Sharif inaugurated a 17,000 tons fleet tanker for Pakistan Navy in an impressive ceremony held at Karachi Shipyard and Engineering Works (KS&EW). Chief of the Naval Staff, Admiral Mohammad Zakaullah and Under Secretary for Defence Industries of Turkey Prof Dr Ismaeel Demir were also present. The contract of fleet tanker was signed under the auspices of Ministry of Defence Production and the ship is being constructed at KS&EW, in collaboration with Turkish Ship building firm M/s Savunma Teknologiler Muhendisilik (STM). 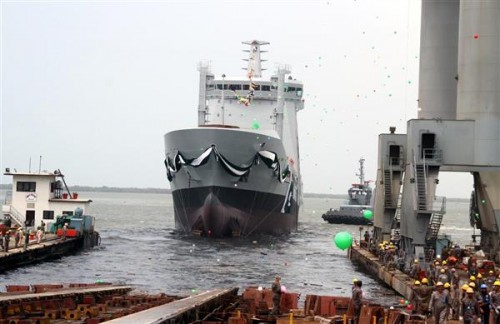 The ship is capable of independently operating at sea for up to 3 months. The double hull tanker is compliant with latest International Maritime Organization (IMO) and marine Pollution (MARPOL) regulations. It will provide logistics support to Pakistan Navy units at sea through transfer of liquid and dry cargo and is also capable of undertaking combat support operation through embarked helicopters. The ship is also equipped with modern medical facilities to support Pakistan Navy fleet units, both during war and disaster relief operations. Speaking on the occasion, the PM congratulated Karachi Shipyard, Pakistan Navy and Ministry of Defence Production for launching the ship two months ahead of the schedule. He said that the initiative would certainly open more opportunities for further collaboration between Pakistan and Turkey in the field of indigenous warship construction in particular, and other defense sector products in general. The prime minister reiterated that Pakistan and Turkey are time tested friends and PN Fleet tanker will always be remembered as a ‘beacon of Pakistan-Turkey friendship’. It will play a vital role towards achievement of self-reliance in defence production, and the government will continue to support the policy of indigenization in all technological spheres.

“The ongoing development programs of the government, including China Pakistan Economic Corridor, stipulate our aim to achieve maximum output in terms of regional trade and trans-shipment with Gwadar as the focal point.” He appreciated the workforce and management of Karachi Shipyard, which has constantly performed and transformed KS&EW into a profitable and viable organization. “It is a success story in public sector which should be emulated by other similar organizations,” he said. MD KS&EW Rear Admiral Syed Hasan Nasir Shah, during his welcome address, said that the fleet tanker is the biggest warship ever built in Pakistan. He said that KS&EW had successfully constructed number of warships for Pakistan Navy in the past and it is fully geared-up to undertake more challenging projects with earnest zeal and energy. “Pakistan Navy has reposed its confidence in KS&EW by awarding mega order for construction of four submarines at KS&EW in collaboration with China. KS&EW is also undertaking installation of 8,000 tons Ship Lift & Transfer System, which will not only enhance KS&EW’s combined capacity of shipbuilding and repairs, but will also significantly increase our revenue generation and creation of more jobs,” he said. In addition to federal ministers, Sindh Chief Minister Syed Murad Ali Shah, Sindh Governor Dr Ishratul Ebad, Foreign Consul Generals, civilian and military officials also attended the ceremony.