GWADAR (92 News) - Addressing a ceremony of departure of the first mega pilot trade cargo at Gwadar Port on Sunday, Prime Minister Nawaz Sharif said that Pakistan will leave no stone unturned to materialize the China-Pakistan Economic Corridor (CPEC) in time. "CPEC marks a new era of development. The project would benefit a major population of the region," he said. The prime minister said it is an historic day marking the materialization of the vision and idea of one belt one road. He said CPEC aims at integrating development and commerce of various regions across Asia and Europe. Chinese Ambassador to Pakistan Sun Weidong said the day is very significant for CPEC and to China-Pakistan relations. He said it is for the first time that a convoy successfully passed through the western part of Pakistan from north to the South. He said it is also for the first time that the Gwadar Port is exporting containers to the overseas destinations.  It proved that the port has the resources, design and handing capacity. He said the trade convoy is an example of the spirit of mutual cooperation, joint construction and mutual benefit and win situation of both the countries.  He said local people will get job opportunities with the completion of Gwadar port. 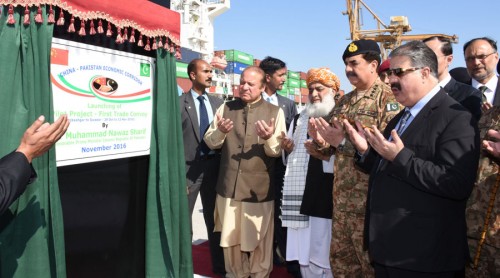 Speaking on the occasion, Balochistan Chief Minister Sanaullah Zehri welcomed the Chinese mega trade convoy and termed it a landmark in implementing the CPEC project.  He appreciated the development vision of Prime Minister Nawaz Sharif.  He also appreciated Chief of Army Staff and Pakistan Army for arranging security of CPEC.  He said Gwadar Port is the base of CPEC which will bring prosperity to the country and particularly Balochistan. Addressing the ceremony, Chinese Company Sino Trans's representative said the first trade convoy actualized the connectivity through CPEC.  He thanked the Pakistani government and armed forces for providing best security to the convey. He said China and Pakistan are best neighbors, partners and friends.  He hoped that the CPEC will be completed on time. In his remarks, Frontier Works Organization Director General Major General Muhammad Afzal said that CPEC is a classic example of Pak-China friendship and cooperation under one belt one road initiative. He said the trade convoy covered 3000 kilometers journey from Kashgar to Gwadar. He said the trade convoy reached Gwadar after passing through Gilgit Baltistan, Khyber Pakhtunkhwa, Punjab and Sindh.  He said FWO constructed 873 kilometers of highways in Balochistan in two years.