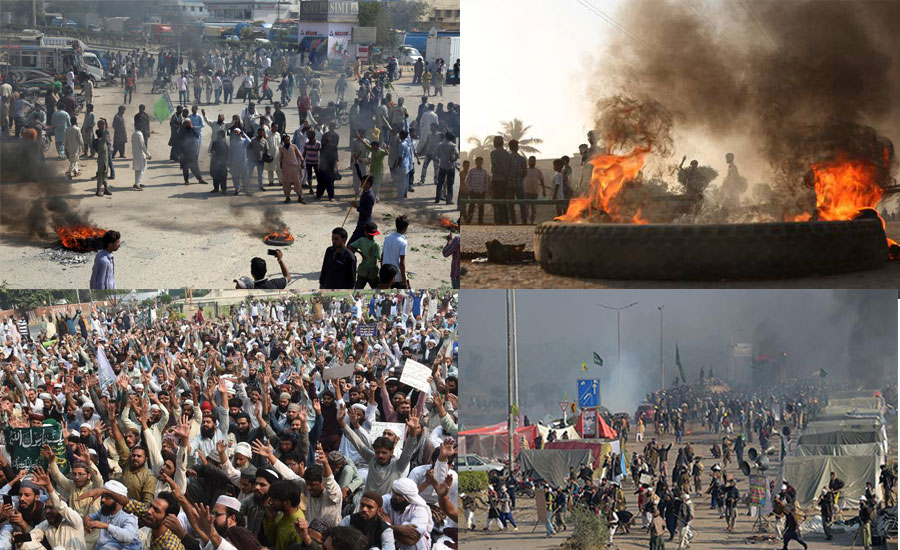 LAHORE/ISLAMABAD (92 News) – The law enforcement agencies have also started countrywide crackdown against hooligans involved in wanton violence. As per reports, Lahore Police lodged as many as 11 cases against the top leadership and 500 other unidentified miscreants. The LEAS lodged FIR against more than 140 persons on violation of section 144. However, eleven accused – who injured Islamabad deputy commissioner – were also arrested by Shahzad Town police. Meanwhile, the interior ministry has started criminal proceedings against rioters involved in destroying property during the three-day countrywide protests against a Supreme Court verdict acquitting Asia Bibi who had been on death row in a blasphemy case. The ministry released initial pictures of the miscreants involved in vandalising property and harming common citizens during the demonstrations, which ended on Friday after the government reached an agreement with the protesters. The ministry also requested cooperation from the citizen in this regard. The ministry also appealed to citizens to cooperate with the police and the Federal Investigation Agency in identifying the rioters. “We will release more pictures of those involved in rioting and destroying public property in the coming days,” a statement from the interior ministry read. It further requested citizens to inform the police and FIA after identifying the agitators. The interior ministry also directed the police and FIA to take action after identifying the perpetrators. Earlier, Lahore Police booked top brass of Tehreek-e-Labbaik Pakistan (TLP) including party s chief Khadim Hussain Rizvi and senior leader Afzal Qadri on charges of sabotaging peace and rioting. The suspects face charges of disrupting peace and blocking roads in Lahore. Likewise, 34 first investigation reports (FIRs) have been lodged in Faisalabad, 12 in Kasur district, two in Islamabad on charges of treason, inflammatory speeches, violence and vandalism. Two accused arrested from Karachi over destruction of public and private properties in Korangi Industrial area. Legal action would also be taken by Cyber Wing of Federal Investigation Agency and Pakistan Telecommunication Authority against all those involved in spreading inflammatory content through digital platforms. 1300 rioters were identified and the security agencies received proofs against suspects for contacting foreign countries during protest. The rioters used more than 300 accounts and It was reported that the protestors had taken directions from foreign countries during the protest. There are also revealed the many calls from out of border. Earlier, Prime Minister Imran Khan directed Punjab Chief Minister (CM) Usman Buzdar and federal ministers to initiate stern legal action against all those involved in pillage and destruction of public and private properties. The prime minister directed officials concerned to not spare miscreants involved in sabotaging peace and normalcy. He also ordered to arrest all those involved in violent activities during the course of Tehreek-e-Labbaik Pakistan’s (TLP) sit-ins.