MUMBAI - A look back at the previous Cricket World Cup finals. 1975: WEST INDIES BEAT AUSTRALIA BY 17 RUNS AT LORD'S Striking the ball with relaxed brutality, West Indies' captain Clive Lloyd tamed an attack headed by the pace and fury of Dennis Lillee and Jeff Thomson to score 102 from 85 balls. He was ably assisted by the 39-year-old Rohan Kanhai, a late replacement for the injured Garfield Sobers. Kanhai contributed 55 to West Indies' 291-8 from their 60 overs. 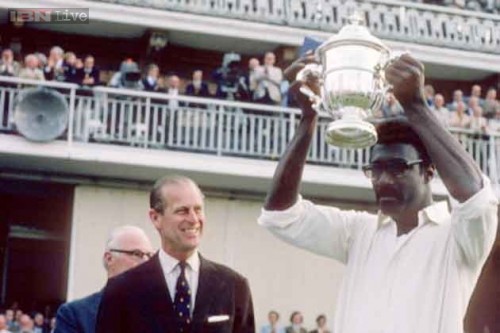 Australia captain Ian Chappell led a spirited reply with 62 before he fell victim to one of three run outs effected by the electric reflexes of Viv Richards. Australia lost five wickets in total to run outs. Lillee and Thomson added 41 for the final wicket before Australia were finally dismissed for 274 at twilight on the longest day of the year. 1979: WEST INDIES BEAT ENGLAND BY 92 RUNS AT LORD'S Viv Richards stroked an imperious 138 and Collis King struck a whirlwind 86 to power West Indies to 286-9 in their 60 overs. Although England captain Mike Brearley and Geoff Boycott put on 129 for the first wicket, they took up 38 of the 60 overs. After their dismissals, the giant Joel Garner ran through the middle order with a series of unplayable yorkers to take five wickets in 11 balls and give his team victory by 92 runs. Colin Croft also took three wickets. 1983: INDIA BEAT WEST INDIES BY 43 RUNS AT LORD'S Viv Richards seemed intent on winning the final against underdogs India on his own after West Indies had been set a modest 184 to win. He struck seven boundaries in his 33 from 28 balls before top-edging a hook which India captain Kapil Dev, running away from the pitch towards the boundary at mid-wicket, coolly collected. West Indies imploded thereafter, with India recording a famous 43-run victory which was to have profound implications at home where one-day cricket quickly superseded the test game as the most popular form of the sport. 1987: AUSTRALIA BEAT ENGLAND BY SEVEN RUNS AT EDEN GARDENS 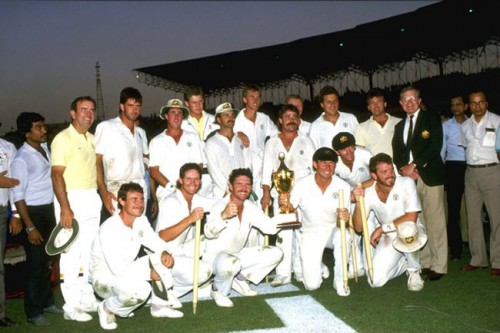 Because of the shorter daylight hours on the sub-continent all matches were played over 50 overs, now the standard length, instead of 60. Opener David Boon's 75 took Australia to 253-5 which seemed to be not enough. England appeared to be cruising to victory at Kolkata's Eden Gardens when Mike Gatting tried a reverse sweep off opposition captain Allan Border's first delivery and lobbed a simple catch. A well-drilled and disciplined Australia side went on to win by seven runs. 1992: PAKISTAN BEAT ENGLAND BY 22 RUNS AT THE MCG 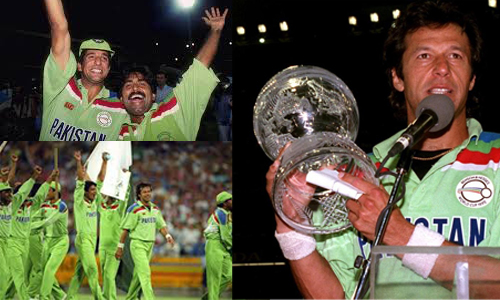 Coloured clothing, floodlights and a white ball, all pioneered in World Series cricket, were finally introduced into the tournament. Famously urged by captain Imran Khan to "fight like cornered tigers," Pakistan rebounded from imminent elimination in the opening round to defeat England in the final at the Melbourne Cricket Ground. All-rounder Imran scored 72 batting at number three in his final match for his country as his side posted 249-6 in 50 overs. He also took the final wicket after his protege Wasim Akram had blown away Ian Botham, Allan Lamb and Chris Lewis. Leg-spinner Mushtaq Ahmed also took three wickets for Pakistan. 1996: SRI LANKA BEAT AUSTRALIA BY SEVEN WICKETS IN LAHORE 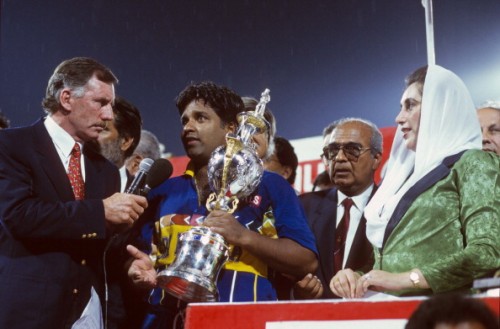 Captain Mark Taylor's 74 took Australia to 241-7 in 50 overs at the Gaddafi Stadium. Sri Lanka lost explosive openers Sanath Jayasuriya and Romesh Kaluwitharana early but a 125-run stand for the third wicket between Aravinda de Silva (107 not out) and Asanka Gurusinha (65) put them on course for their first title. De Silva, their most accomplished batsman, and captain Arjuna Ranatunga (47 not out) then added 97 for the unbroken fourth wicket to see their side through for a seven-wicket win. 1999: AUSTRALIA BEAT PAKISTAN BY EIGHT WICKETS AT LORD'S 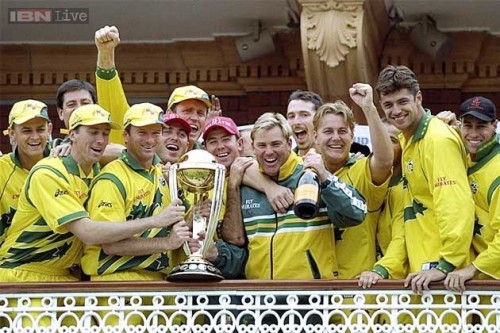 Australia, the world's best test side, made a no contest of the final against Pakistan, taking barely 4-1/2 hours to overwhelm the 1992 champions. Pakistan were all out for 132 in 39 overs, with leg-spinner Shane Warne taking four wickets which proved an easy target for Australia to chase down. Wicketkeeper Adam Gilchrist smashed 54 off 36 balls as his side chased down the total in 20.1 overs with eight wickets to spare. 2003: AUSTRALIA BEAT INDIA BY 125 RUNS IN JOHANNESBURG 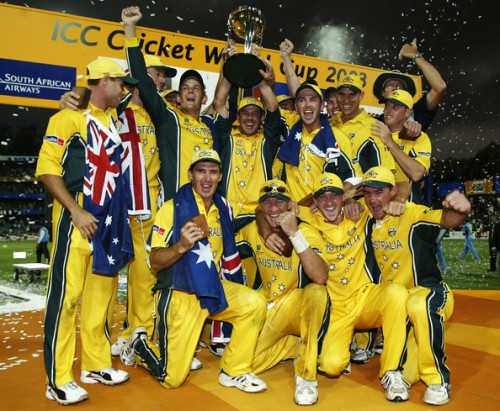 Australia's new one-day captain Ricky Ponting struck eight sixes in his 140 not out in the final against India as his team scaled new heights with a relentless 125-run victory. The Australians became the first team to win three World Cups and took their unbeaten run in the tournament to 16. Riding on Ponting's imperious ton and half-centuries from Adam Gilchrist and Damien Martyn, Australia made 359-2. The total proved too tough for India who were bundled out for 234 inside 40 overs despite 82 from opener Virender Sehwag. 2007: AUSTRALIA BEAT SRI LANKA BY 53 RUNS (D/L) IN BARBADOS 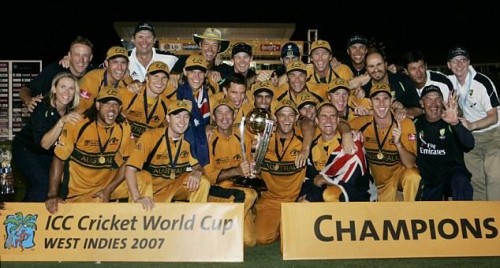 Adam Gilchrist bettered Ponting's record tally in a final with a typically audacious 149. Australia finished with victory over Sri Lanka in a rain-shortened final at the Kensington Oval in Bridgetown, Barbados. The win gave Australia their third title in a row and fourth overall World Cup title. 2011: INDIA BEAT SRI LANKA BY SIX WICKETS IN MUMBAI 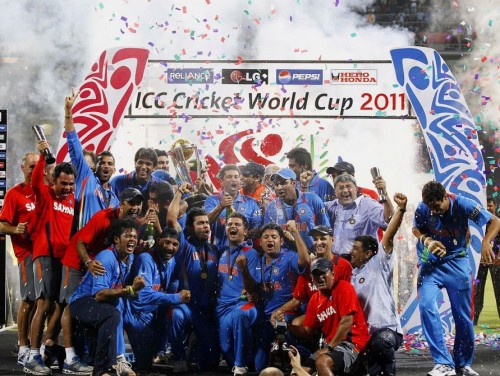 Mahela Jayawardene scored an unbeaten 103 in Sri Lanka's challenging 274-6 but India recovered from a slow start to win by six wickets with 10 balls to spare at the Wankhede Stadium. Gautam Gambhir made 97 and captain Mahendra Singh Dhoni an unbeaten 91 as India became the first country to win the World Cup final on home soil. - REUTERS