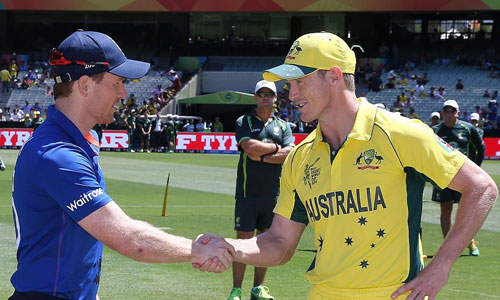 (Web Desk) - Enjoying a week's break before their next World Cup clash, Australian cricketers won't need to rally against rotation. Australia crushed England by 111 runs at the MCG on the weekend and next face Bangladesh in Brisbane on Saturday. The squad has been given two rest days and will resume training on Wednesday. Given the extended break between games, no player will be asked to sit out the Gabba clash due to workload concerns. "I certainly don't think there's going to be any rotations," all-rounder Mitch Marsh said. "With a week between games there's certainly not going to be any reason for us to rotate players in and out. "The selectors will be picking the best side that they think will win that particular game." There will be at least one change to the XI that defeated England, with captain Michael Clarke returning from hamstring surgery. Vice-captain George Bailey has all but accepted he will make way for Clarke. "It certainly is a good problem to have," Marsh said. "It's going to be a tough selection. "All the batters are in form, which is great for us." Bangladesh start their World Cup campaign with a match against Afghanistan in Canberra on Wednesday. The side's first serious challenge will come in Auckland on February 28, when they face New Zealand. "On their day they're hard to beat, but we'll come up with some ideas of how we might put up a good performance," New Zealand coach Mike Hesson said. "They are obviously playing some great cricket at the moment and they're the side to beat, or one of the sides to beat. However, Hesson watched the second half of Australia's win over England and suggested he saw a "few areas we might like to exploit". "That would be pretty silly of me," Hesson replied, when asked to reveal Australia's weaknesses.