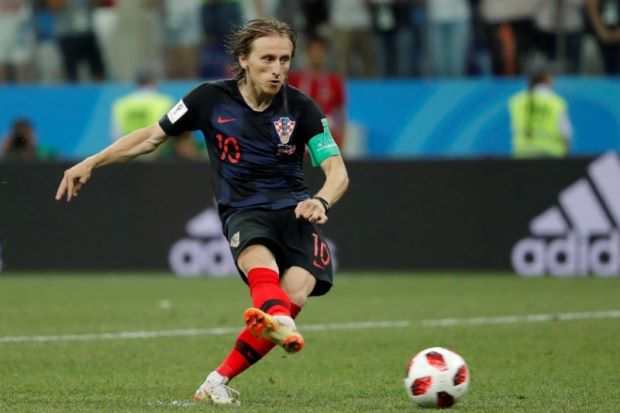 NIZHNY NOVGOROD, Russia (Reuters) - Of all the Croatia players who mobbed Danijel Subasic after his penalty shootout heroics against Denmark on Sunday, none would have hugged the goalkeeper tighter than his captain Luka Modric.
Subasic made three saves to help put Croatia into the World Cup quarter-finals and relieve the agony of his skipper who had been shell-shocked after failing to convert a penalty with minutes left in extra time and the score locked at 1-1. It was a rollercoaster night for the wispy playmaker Modric, so influential in Croatia’s barnstorming run through the group phase. Modric had seemed poised to snatch the World Cup limelight at a tournament already deprived of Cristiano Ronaldo and Lionel Messi after Portugal and Argentina lost in the round of 16. But after a lively opening in Nizhny Novgorod, Modric was mostly subdued in a match that started with a bang and two goals in four minutes before descending into a much more muted affair. Without their fleet-footed tactician pulling the strings, Croatia disappeared for much of the game, allowing Denmark to put together most of the promising moves in the second half. It was well into extra time before Croatia rallied, as if finally struck by the notion that they would rather not have to test themselves against Christian Eriksen and the Danes in the event of a shootout. It was Modric who lit the fuse and then put the win in Croatia’s grasp with a sumptuous through ball that Ante Rebic ran on to before being felled by Mathias Jorgensen in the area. Modric took the penalty but was outwitted by Denmark’s brave keeper Kasper Schmeichel, who blocked the shot that whizzed toward the corner. A crestfallen Modric stared blankly into space for a few seconds but he later returned to the spot to face his demons. Tottenham playmaker Eriksen was denied by Subasic with the opener of the shootout, but Modric got the better of Schmeichel with Croatia’s third attempt. “It can happen that you miss a penalty but I am fascinated with his determination to shoot after he missed in extra time,” Croatia coach Zlatko Dalic told reporters of the Real Madrid playmaker. “He took the responsibility as a true captain and it speaks volumes for Luka. “He said it himself, ‘I am going to take a penalty in the shootout’. Can you imagine if he had not scored? But he is a great player.” Modric’s midfield partner Ivan Rakitic struck the decisive blow in the 3-2 shootout, setting up a quarter-final clash with high-flying hosts Russia. After winning their group with three straight victories, it was an unconvincing way for Croatia to keep alive their World Cup but Modric’s team can still hope to emulate the ‘golden generation’ who put the Balkan nation into the semi-finals of the 1998 tournament.