Croatian 'miracle' down to team work and unity, says Dalic 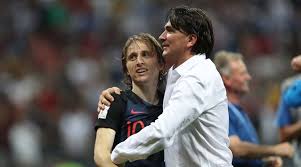 Croatian 'miracle' down to team work and unity, says Dalic

MOSCOW (Reuters) - Croatia’s fairytale run to the World Cup final is a footballing “miracle” built on a foundation of teamwork and unity which has seen them outlast sides reliant on brilliant individual talent, coach Zlatko Dalic said on Thursday.
Wednesday’s 2-1 victory over England in Moscow sent the Croatians into Sunday’s final against France, a third straight knockout match in which they had been forced to play extra time. The mental resilience necessary to come through such tests was the result of the emphasis on playing as a team, Dalic said, and indicated a wider trend at a World Cup where the likes of Neymar, Cristiano Ronaldo and Lionel Messi all went home early. “For me, Messi is the best player in the world and Neymar is very close,” Dalic told a news conference. “But at this World Cup, the star-studded teams relying on the big names are already on the beach. It’s the compact, united teams fighting for something that are still around. “It’s been the strangest World Cup. Football has advanced so much so any team can have well-organised defence, so there are no huge winning margins and the team is everything. “This was our problem for 10 years, we had great individuals but no unity and that’s why I had to build that unity of purpose in the team.” Croatia are hardly a team of no names, however, a fact that Dalic was quick to point out when asked if England had disrespected his team with their confidence before the semi-final. In Luka Modric and Ivan Rakitic they have the midfield engines of both Real Madrid and Barcelona, while the scorer of their winner against the Three Lions, Mario Mandzukic, won the Champions League with Bayern Munich and now plays for Juventus. “Modric has had a brilliant season with Real Madrid and here, he’s still sprinting about the pitch in the 115th minute,” said the coach. “I think he has been the player of the tournament regardless of the result on Sunday.” Dalic said he had allowed his players to celebrate the victory on Wednesday night and was consequently unaware of the extent of any injuries in his squad. “They were tired, they were exhausted, they were overjoyed,” he said. “They have a day off and we’ll assess them tomorrow. They let their hair down and I approved that because we have been in isolation for 50 days.” As on Wednesday after the match, Dalic pointed out that Croatia did not have a stadium suitable to host England in the new Nations League later this year, an issue that he viewed as proof of the extraordinary feat he had orchestrated. “We’ve definitely written ourselves into history, given the conditions and infrastructure back home, we are a miracle,” he added. “This is maybe one of the greatest sporting achievements of any Croatians. This is a global success and I’m very glad it’s happened under my management.”