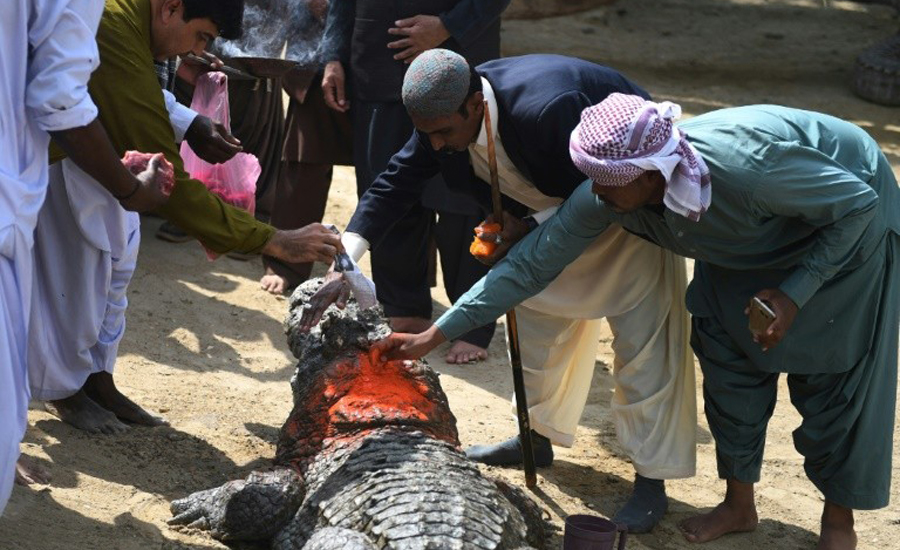 KARACHI (AFP) - Dancing and chanting in Swahili at a crocodile shrine outside Karachi, hundreds of Pakistani Sheedis swayed barefoot to the rhythm of a language they no longer speak -- the celebration offering a rare chance to connect with their African roots. For many Sheedis, the swampy crocodile shrine to Sufi saint Haji Syed Shaikh Sultan -- more popularly known as Mangho Pir -- is the most potent symbol of their shared African past, as they struggle to uncover the trail that led their ancestors to Pakistan. Many, like 75-year-old Mohammad Akbar, have simply given up the search for their family's origins. The descendants of Africans who have been arriving on the shores of the subcontinent for centuries, the Sheedis rose to lofty positions as generals and leaders during the Mughal Empire, which ruled swathes of South Asia. But, actively discriminated against during British rule, their traditions began to fade, and they found themselves wholly shunned when Pakistan was created in 1947, absent from the country's elite political and military circles. Figures are scant but it is generally accepted that Pakistan holds the highest number of Sheedis on the subcontinent, upwards of around 50,000 people. But their history has been scantily written, making it difficult if not impossible for Sheedis -- including even those like Akbar whose ancestors arrived in Pakistan relatively recently -- to trace their antecedents. "I came to know in the 1960s that my grandfather belonged to Zanzibar, and we contacted the Tanzania embassy to find our extended family," Akbar told AFP outside his home in Karachi. "We were told that we can never reach them until we can identify our tribe, which we don't know," he said. "I never tried again." His plight is common, with little in the way of documentation or scholarship on the community. What is available suggests many arrived as part of the African slave trade to the east -- a notion rejected by many Sheedis, most of whom now reside in southern Sindh province. "We don't subscribe to the theories that someone brought us as slaves to this region because Sheedis as a nation have never been slaves," argues Yaqoob Qanbarani, the chairman of Pakistan Sheedi Ittehad, a community group. As the knowledge of their origins has faded, so too have many of their traditions, including the vestiges of Swahili once spoken in parts of Karachi. "Swahili has been an abandoned language for some generations now," says Ghulam Akbar Sheedi, a 75-year-old community leader. "I remember that my grandmother would extensively use Swahili phrases in our daily conversation," says 50-year-old Atta Mohammad, who now struggles to remember even a few sayings. 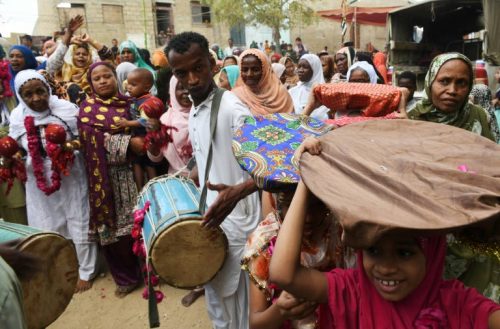 With so many traditions lost to the past, the Sheedi mela, or festival, at the Mangho Pir shrine has assumed rich significance and been the epicentre of the community in Sindh for centuries. They no longer know why it is held there, they are simply following in the steps and repeating the words of their ancestors. "It attracts the Sheedi community from all over Pakistan," Qanbarani tells AFP. "We celebrate Mangho Pir mela more than Eid," he adds. The celebration features a dancing procession known as the Dhamal, with men and women in trance-like states -- a rare sight in conservative, often gender-segregated Pakistan. "The Dhamal dance... is done with great devotion and much delicacy," says Atta Mohammad, who spoke with AFP at the festival. "Some of us are captured by holy spirits." Mehrun Nissa, 65, prepares a sacred drink during the mela while translating from what she says is a Swahili dialect. "Nagajio O Nagajio, Yo aa Yo.... means now we are leaving to have a drink from the bowl," she explains. Mangho Pir is also home to over 100 lumbering crocodiles that waddle between the devotees near a swampy green pond where they have lived for generations. Legend holds that lice on the Sufi saint's head transformed into the reptiles who now live at the shrine. The oldest crocodile -- known as More Sawab, and believed to be anywhere between 70 and 100 years old -- is feted at the festival's climax with garlands and decorative powder while being fed chunks of raw meat. 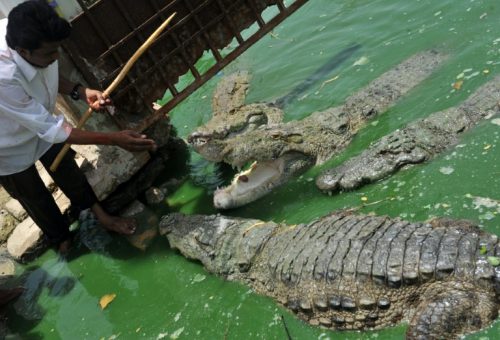 Even this tenuous link to the community's past is in danger of being severed, however. The celebrations this March were the first time the festival has been held in nine years, after rising extremism saw Sufi shrines come under threat across Pakistan, with repeated gun and suicide bomb attacks. "The situation was not suitable for us as children and women also participate in the mela," said Qanbarani, as heavily armed police commandos flanked the crowd. But with dramatic improvements in security in recent years the community hopes to continue the mela, celebrating traditions that have survived slavery, colonisation, and modernisation. "It is a Sheedi community belief that by honouring the crocodile our whole year will pass in peace, tranquility and prosperity," explains Mohammad. "We look forward to celebrating the mela next year too, and forever."