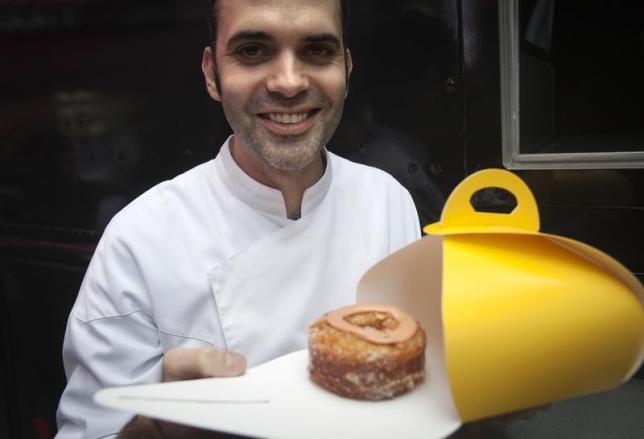 NEW YORK - Dominique Ansel, whose Cronut hybrid of a doughnut and croissant caused a food sensation two years ago, is expanding on his success with new shops in New York and Tokyo and customized desserts. The 37-year-old enjoyed a banner 2014 when the James Beard Foundation named him the top U.S. pastry chef and he launched his first cookbook "Dominique Ansel: The Secret Recipes." The native of Beauvais, France, who arrived in New York in 2006, spoke to Reuters about his new bakeries and what inspires his dessert creations. Q: What are you planning for your second New York bakery, Dominique Ansel Kitchen, that's set to open in the spring? A: The idea for this concept is to make desserts to order. We are going to change slightly the organization of a regular bakery, where we are going to have stations. Each station is going to have its own chef finishing a few desserts. Q: Will there be premade desserts too? A: About 70 percent of our menu will be made to order. Like the pastry world, some may be better in a day or so. Q: What will your bakery in Tokyo be like? A: It’s similar to the shop we have on Spring Street (Dominique Ansel Bakery in New York City). I also plan to create a line of pastries that explore the Japanese culture. You won’t be able to get it anywhere else. Q: Are you tired of speaking about the Cronut? A: The Cronut is a wonderful creation. It has opened the door to so many different things. Last year, at a charity event to fight hunger in New York City, with 24 Cronuts we raised over $100,000. We change the flavor every month. We try to keep it fun and exciting. Q: How many people are still waiting for Cronuts each day? A: About 100 people every morning are outside our door before we open. We hand out fresh baked madeleines and hot chocolate while they wait. I want to make sure people have a good time. Q: What is your first memory in the kitchen? A: Making a yogurt cake using a yogurt container to measure the flour. This is a French classic. Q; What is your philosophy of baking? A: It’s really to give people a connection with the food, an emotional connection. - Reuters