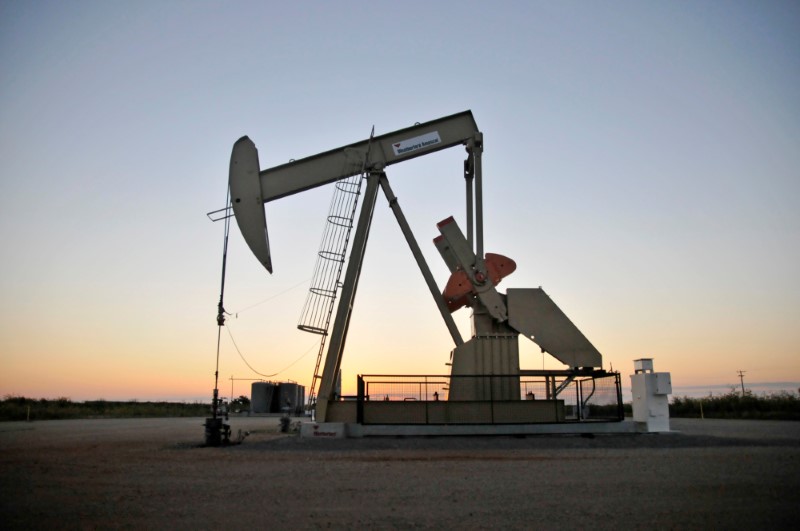 SINGAPORE (Reuters) - Brent crude oil futures dipped for a second session on Monday, with prices coming under pressure from record US output and expectations of higher OPEC supplies. Global benchmark Brent LCOc1 was down 12 cents, or 0.16 percent, at $76.67 a barrel by 0159 GMT. “Crude oil remained under pressure as the market remained focused on the discussion between OPEC members about whether they should increase production later this year,” ANZ said in a note. “In the US, the data also presented a gloomy picture. Crude oil production rose to another record, while drilling activity picked up again.” But US West Texas Intermediate (WTI) crude CLc1 futures gained 6 cents, or 0.09 percent, to $65.87 a barrel. Last week, the market lost around 3 percent, adding to a near 5-percent decline from a week before. “We are going into summer, the high demand season, and I think we are going to see a fall in US crude oil inventories, but shale oil output is growing. Which one is going to win is the issue,” said Tony Nunan, oil risk manager at Mitsubishi Corp in Tokyo. Saudi Arabia, effective leader of the Organisation of the Petroleum Exporting Countries (OPEC), and Russia have discussed boosting output to compensate for supply losses from Venezuela and to address concerns about the impact of US sanctions on Iranian output. Russia’s largest oil producer Rosneft  will be able to restore 70,000 barrels per day (bpd) of oil output in just two days if global production limits are lifted, Renaissance Capital wrote in a client note. US crude production rose in March to 10.47 million barrels per day (bpd), a monthly record, the Energy Information Administration said on Thursday. US drillers added two oil rigs in the week to June 1, bringing the total to 861, the most since March 2015, General Electric Co’s Baker Hughes energy services firm said on Friday. That was the eighth time drillers have added rigs in the past nine weeks. Hedge funds and other money managers cut their bullish wagers on US crude futures and options, according to data released on Friday, as oil prices slumped on oversupply fears. The speculator group cut its combined futures and options position in New York and London by 50,937 contracts to 370,980 during the week to May 29, the US Commodity Futures Trading Commission said.