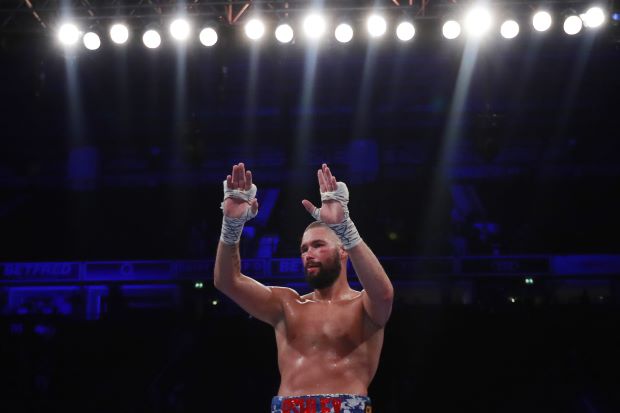 MANCHESTER, England (Reuters) - Ukrainian Oleksandr Usyk remained undisputed world cruiserweight champion with an eighth round stoppage of British underdog Tony Bellew at the Manchester Arena. The 2012 Olympic heavyweight gold medallist stunned Bellew with a right to the head before banging in a looping left to send him crashing to the canvas and, ultimately, into retirement. British referee Terry O’Connor stepped in and stopped the fight, with 31-year-old Usyk stretching his professional record to 16-0-0. In a fight that was more evenly matched than most had expected, Bellew was ahead 67-66 68-65 on two of the scorecards and level 67-67 on the third going into the decisive round after coming out fighting from the start. The Briton, a former world cruiserweight champion who moved up to heavyweight and twice beat compatriot and former world champion David Haye, paid an emotional tribute to his southpaw rival. “I tried my best. I gave it everything I’ve got,” Bellew told the crowd, admitting he did not know what round it was or how he had been felled. “Make sure you clap him because he’s an exceptional fighter ... one of the pound-for-pound best. He beat me fair and square, I’ve no excuses. “He’s an amazing fighter. He is a great champion, the greatest man I’ve ever shared a ring with...he’s just better than me.” Usyk, the first man to hold the IBF, WBO, WBA and WBC belts simultaneously, has made no secret of the fact he wants to move up to heavyweight and challenge Britain’s reigning champion Anthony Joshua. “Bringing Usyk to heavyweights will bring some new spirit to the heavyweight division. He definitely needs to fight Anthony Joshua,” said the Ukrainian’s promoter Alex Krassyuk. Joshua, who holds the WBA, IBF, WBO and IBO heavyweight belts, was the 2012 Olympic super-heavyweight champion.