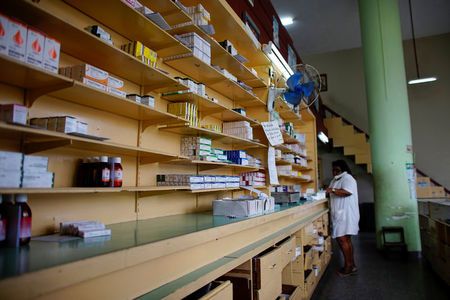 HAVANA (Reuters) - Cuba is working on fixing chronic medicine shortages that started appearing a year ago due to its cash crunch, health officials said in an article published late on Thursday in ruling Communist Party newspaper Granma.

Cuba's healthcare system, built by late leader Fidel Castro, is one of the revolution's most treasured achievements, having produced results on a par with rich nations using the resources of a developing country and in spite of the decades-old U.S. trade embargo.

But more than 85 percent of the resources its pharmaceutical industry uses are imported, BioCubaFarma Director of Operations Rita Maria García Almaguer was cited as saying in Granma, and Cuba has been struggling to pay foreign providers.

Medicine production therefore stalled in 2016 and some of 2017 due to lack of inputs, according to García Almaguer.

"The production of some forms of pharmaceuticals was stalled because the resources were not available on time, which means we were unable to fulfill the demands of the national health system," she was quoted as saying.

Many common medicines, for example contraceptives or those treating hypertension, have been scarce or lacking altogether over the past year, Granma wrote.

BioCubaFarma and the government had been working together since the start of last year to fix the issue and ensure the availability of at least one medicine per pharmacological group, García Almaguer said.

"In August we started holding meetings at the highest level, taking an important series of measures to help resolve or at least alleviate the shortages," Cristina Lara Bastanzuri, head of the Medicine Planning Department at the health ministry, said in the article.

She said these meetings helped solve an issue with Chinese providers and raise the availability of imported medicines.

"The industry has been recovering, and most production is stable now," said García Almaguer, adding that it had focused on medicine for serious ailments like cancer and HIV.

The government had also tightened its control of pharmacies nationwide given it had detected some corruption, such as the illegal sale of medicine, Granma wrote.

Many Cubans complain that when there are medicine shortages, some pharmacists sell the little they have at several times the subsidized state prices on the black market.