Cuba returning Castro's ashes to birthplace of the Revolution 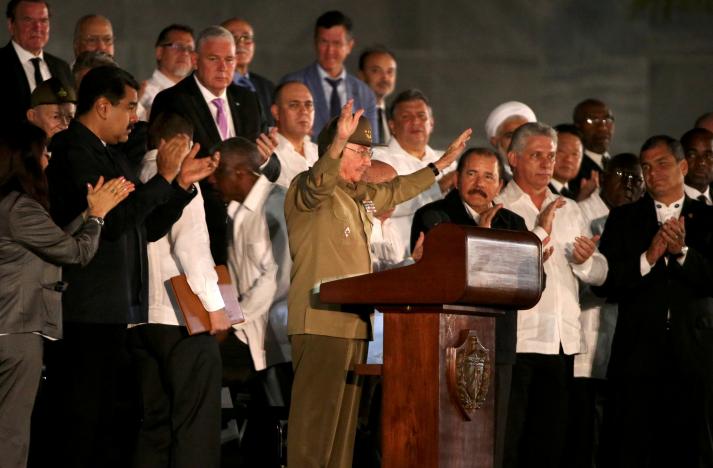 Cuba returning Castro's ashes to birthplace of the Revolution

HAVANA - A procession carrying Fidel Castro's ashes prepared to set out from Havana on Wednesday on a long trek to a final resting place in Santiago de Cuba, where the first shots in the Cuban Revolution were fired and where Castro claimed victory in 1959. Castro, who ruled Cuba for half a century until 2008 and built a Communist state on the doorstep of the United States, died on Friday aged 90, plunging the Caribbean nation into nine days of mourning. He was cremated on Saturday. It will take the cortege carrying his ashes three days to make the 550-mile (900-km) journey eastward across the eyebrow-shaped island to Santiago de Cuba, going back along the route taken by his bearded revolutionaries in their victory march to Havana in 1959. The interment will take place on Sunday morning. On Tuesday night, tens if not hundreds of thousands of Cubans, as well as leaders of Cuba's leftist allies and other developing countries, gathered in Havana's Revolution Square for a service commemorating "El Comandante" (The Commander). "He more than fulfilled his mission on this earth," Venezuelan President Nicolas Maduro, whose government supports Cuba's ailing economy with oil sold on favorable terms, told the massive crowd. "Few lives have been so complete, so bright. He has left unconquered." Castro was admired by many around the world, especially in Latin America and Africa, for standing up to the United States, instituting free education and health care, and sending doctors around the world on missions of mercy. But others vilified him as a dictator who ruined the economy with his brand of socialism and denied Cubans basic human rights such as freedom of speech. Some two million Cuban-Americans live in the United States, the result of a steady stream of people quitting the country for political and economic reasons. With the average state salary at $25 per month, many young Cubans look for ways to leave, seeing little future in their homeland. A pall of silence has settled over Havana's usually buzzing streets since the mourning period began. Officials have banned live music, and suspended the professional baseball season and sales of alcohol. Nationwide, Cubans have lined up to sign condolence books and pledges to honor Castro's socialist ideology. State media continue to play tributes on a loop. Tens of thousands of Cubans are expected to line the route of the caravan carrying Castro's ashes toward Santiago, where he first launched his revolutionary movement in 1953 with an assault on the Moncada barracks. Later, after his bearded guerrillas deposed US-backed dictator Fulgencio Batista, they swept down from the Sierra Maestra mountains into Santiago, before making their victory march westward towards the capital. -Reuters