Cuba's journey from rock labor brigades to the Rolling Stones 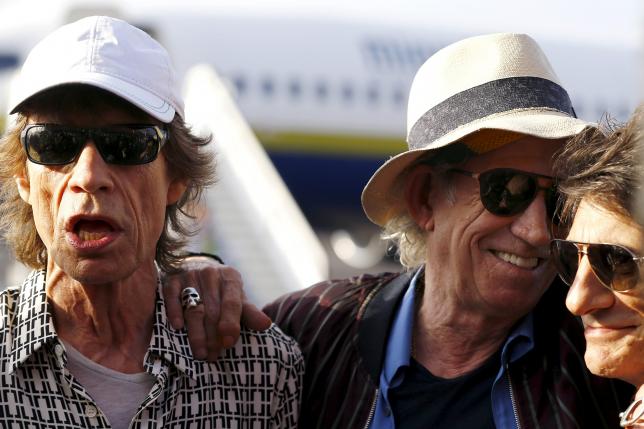 Cuba's journey from rock labor brigades to the Rolling Stones

HAVANA - When Carlos Carnero's rock band Los Kent plugged in guitars and drums to play Rolling Stones covers on Cuba's Island of Pines in the 1960s, soldiers stopped the gig at gunpoint in minutes and marched the musicians onto a boat heading back to the mainland. Now some 50 years later, Carnero is preparing to see the Stones play to a crowd of 400,000 people in Havana on Friday in the latest sign of Cuba's thaw with the West. It is the first time the British band has performed in Cuba and caps a week in which U.S. President Barack Obama made a historic visit. The Stones arrived in Cuba on Thursday. "Time changes everything," Mick Jagger said at Havana airport, when asked about a former ban on his music in Cuba. Despite the stern treatment Los Kent received in the 1960s, Carnero's instruments were not confiscated that day and his band survived to play in secret house parties. Others suffered more for their love of rock and roll, including being sent to farms in labor brigades meant to correct "ideological deviation." "They called it the music of the enemy," Carnero said, clutching dog-eared black and white photos of Los Kent as young men on stage in 1963. Hippies and rock fans faced repression in Europe and the United States too in the 1960s, but Cuba went further, banning music from artists such as the Stones, the Beatles and Elvis Presley on the radio and television after the 1959 revolution that brought Fidel Castro to power. Rock was frowned on for decades and it was only in 2000 that Los Kent were given a license to work professionally, as people of Carnero's generation reached senior positions in government. Los Kent, who got their name from a guitar brand, will play on Thursday night in a bar at the Havana Melia hotel, where the Stones are expected to stay. To get his musical fix, Carnero, now 66, secretly listened to short-wave radio stations from Florida and shared pirated copies of vinyl records brought in by diplomats' children and sailors and passed around the scene. He was excluded from college for two years because he refused to cut his long hair, despite pointing out to the authorities that heroes of the revolution like Che Guevara and Camilo Cienfuegos sported unkempt locks. His brother was among those sent to the countryside - given the choice of farm work and abandoning his tight pants and musical taste or leaving the technical college he attended. "After two months in the countryside he decided he'd rather not continue at school and came home," said Carnero, chuckling. "It was a moral punishment, you were doing something you weren't allowed to do because somebody didn't like it," Carnero said, in a home studio where an electronic drum kit and keyboard vie for space with an acoustic guitar. Some of Cuba's leading personalities were sent to similar camps, including composer Pablo Milanes and Cardinal Jaime Ortega. Many rock musicians later left the country. Fidel Castro later regretted the censorship of music and attended the unveiling of a statue of John Lennon, one of the four Beatles, in a Havana park on the 20th anniversary of his death on Dec. 8, 2000. Carnero said Castro told him that his revolutionary government was facing huge international challenges in the 1960s as he tried to consolidate the revolution and that many in his government did not understand what the young rockers were up to. "Despite all the difficulties, I wouldn't change my youth for that of today - we had so much love for what we did that there was nothing that could stop us," Carnero said. -Reuters